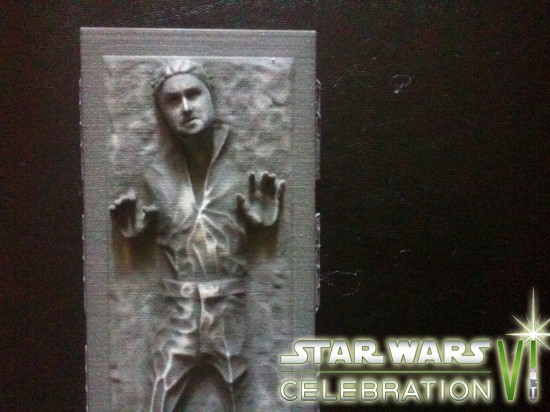 Disney Parks will be be a part of Star Wars Celebration VI with exclusive merchandise and presentations. They will also be offering their Carbon Freeze Me experience which was first offered at Star Wars Weekends.

Disney will be holding two panel presentations at this years event, one on upcoming Star Wars merchandise and one on Star Tours: The Adventures Continue:

Disney Parks & Star Wars – This is Where the Magic Begins
Thursday, Aug. 23, 2012, 3 p.m. through 4 p.m. at the Behind the Scenes Stage (W414 ABCD)
Be among the first to get a sneak peek into what new exclusives will be coming from the Disney Parks in 2012 and 2013. You will also take an inside look behind the magic at how Disney Parks creates exclusive Star Wars merchandise, with insights from Brad Schoeneberg and Cody Hampton of Disney’s creative development team.

The New Star Tours: The Adventures Continue
Saturday, Aug. 25, 2012, 3 p.m. through 4 p.m. at the Behind the Scenes Stage (W414 ABCD)
Before you take your next trip on the Starspeeder 1000, you’ll want to check out this panel that goes behind the scenes at Walt Disney Imagineering and Industrial Light & Magic. Bill George and Steven F. Spiegel will reveal what it took to relaunch the hit attraction in 3D, and what secrets the amazing ride through the galaxy may hold.

On the show floor, Walt Disney World will be bringing the Carbon Freeze Me experience from Star Wars Weekends to Celebration VI. The Carbon Freeze Me experience offers Star Wars fans the chance to be frozen in customized carbonite figurines using several cameras that capture your face and then reconstructed in a computer for processing. The figurines cost $99.95 plus tax and shipping for an 8-inch figurine with your face on Han Solo’s body.

Here’s a video of Attractions – The Show host Banks Lee getting “frozen” at Star Wars Weekends:

Disney Theme Park Merchandise will also be offering D-Tech on-demand cases featuring a variety of Star Wars and Disney designs printed onsite for only $36.95 per case. Both will be located at booth 341. 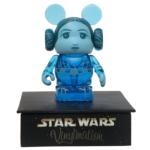 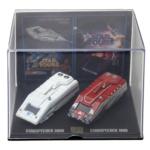 The Disney Parks Blog recently announced that Disney Theme Park Merchandise will also debut two event tee-shirts with Disney characters playing the roles of Star Wars characters along with an Aurebesh nametag with a few additional destinations not found during Star Wars Weekends 2012.

The last group of items they will offer are next waves of Disney and Muppet character action figures which will make their way into Disney Parks later. Click here to visit the Disney Parks Blog for more information.

Star Wars Celebration VI will be held at the Orange County Convention Center from August 23 through 26, 2012. Click here for more information.

i like to fined a them
about fun celebration