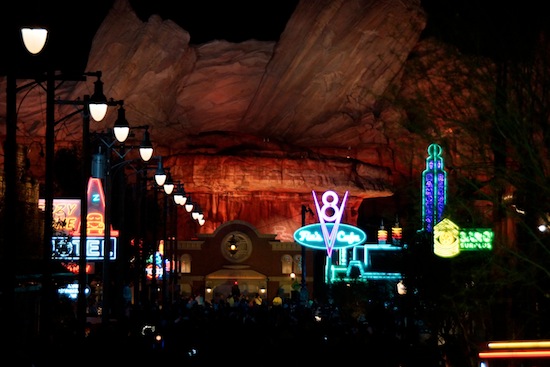 Route 66 leads guests at Disney California Adventure Park into Cars Land, a fully detailed, immersive re-creation of Radiator Springs, the setting for the hit Disney•Pixar animated film Cars. Guests will be awed by the panoramic vistas of Ornament Valley, experience the thrills of three new attractions and even get to interact with some of their favorite fuel-driven friends.

The re-creation of Radiator Springs captures the authentic feel of Route 66 with three-dimensional versions of familiar landmarks from the film, including Cadillac Mountain Range in Ornament Valley, Luigi’s Casa Della Tires and Flo’s V8 Café. One young boy was even overheard asking his parents, “Is this where the movie was filmed?”

The Attractions of Cars Land

Cars Land also treats guests to food and merchandise locations inspired by the Radiator Springs landmarks in the film:

Meet the Residents of Radiator Springs

Here’s a look at Disney Imagineers researching the real Route 66 compared to the final product.

A time-lapse video showing the construction of Cars Land:

To learn more about Cars Land or to purchase tickets to visit click here.