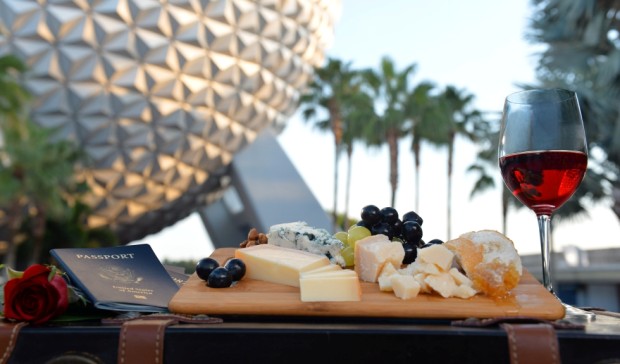 From Sept. 25 though Nov. 16, 2015, Disney chefs and festival programmers are whipping up a feast of surprises. New wine tastings, parties and culinary experiences built around the 20-year milestone will bring together loyal festival fans and first-timers. As part of the celebration, Chef Remy of the Disney animated film “Ratatouille” will invite guests to join a culinary scavenger hunt.

Growing in scope each year since 1996, the 53-day Epcot event features inspired bites and sips from around the world at more than 25 outdoor marketplaces, nightly Eat to the Beat concerts of many musical genres, signature dinners and featured tasting events.

Festival guests can pair wines and beers with savory and sweet dishes as they stroll the World Showcase Promenade and earn stamps on their complimentary festival passports. Champagne, cocktails and “mocktails” also will bubble up on festival menus. The Ocean Spray Cranberry Bog returns for a fourth year so that families can discover the cranberry’s rich agricultural heritage and learn fun facts about the tart fruits.

‘The Chew’ tapings – ABC’s “The Chew” is leaving its Manhattan studio for the first time in the show’s history to broadcast from the Festival. The series will tape five shows with co-hosts Mario Batali, Michael Symon, Carla Hall, Clinton Kelly and Daphne Oz on Oct. 7, 8 & 9 to air during the week of Oct. 12 to 16 on “The Chew.” The shows from Epcot will showcase festival highlights as well as food and beverage from “around the world” of Walt Disney World. Visit TheChew.com for information on how to obtain tickets to be part of the live audience during “The Chew” broadcasts.

Future World marketplaces – “The Chew” will be featured in two themed marketplaces located at the new Next Eats area of Future World, the first time in the festival’s history that new culinary experiences have expanded into the Future World area of the park. At the new Sustainable Chew Marketplace, festivalgoers can enjoy three dishes inspired by “The Chew” co-hosts. From savory pork spareribs with red wine and fennel with cheesy mascarpone grits and ricotta & zucchini ravioli with tomato sauce to vanilla panna cotta with fresh figs and pistachio brittle, “The Chew” has something for everyone. The eco-home-inspired marketplace will offer guests a chance to learn more about how food is grown and the importance of food sustainability. Herbs and vegetables harvested from The Land pavilion greenhouses at Epcot will flavor the marketplace dishes. A second new Future World marketplace at Next Eats will feature the Chew Lab, where Disney chefs are collaborating with “The Chew,” to create a cutting-edge marketplace inspired by food-science labs and the hottest culinary tech trends.

Festival Center gets cookin’ – Guests can join culinary demonstrations, beverage seminars and mixology seminars daily for a nominal fee. More festival fun will include the complimentary Back to Basics weekend series featuring epicurean tips and tricks from the pros.

Chase Lounge offers perks – Anyone who owns or wants to own a Chase debit or credit card will find complimentary refreshments and interactive fun at the Chase Lounge at American Adventure.

The Party for the Senses grand tasting events, signature dinners and other special wine and culinary programs require reservations and separate event admission. When a reservation booking date is announced this summer, guests can call 407-WDW-FEST (939-3378) and get details at EpcotFoodFestival.com.