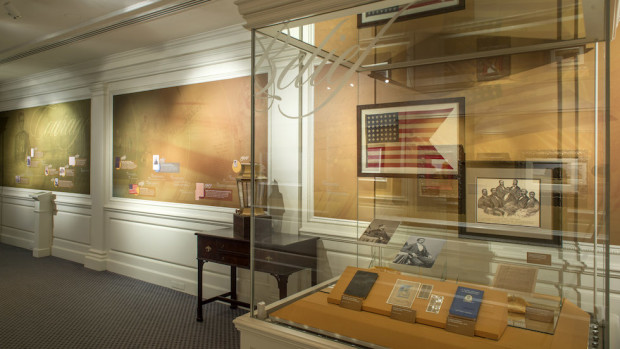 Guests can celebrate Black History Month throughout the month of February with special experiences at the American Adventure Pavilion at Epcot.

From historical displays and artifacts to book signings by Pattie LaBelle and author Terrence Roberts, guests can take a stroll through the pages of America’s history and learn about the influence of African-American culture.

In honor of Black History Month, guests have the opportunity to meet renowned African-American authors and cultural icons select Saturdays during the month of February. Book signings are open to all guests and hosted at the American Adventure Pavilion, where books written by each guest author are also available for purchase throughout the month.

Pattie LaBelle, author of “Recipes for the Good Life”
Saturday, Feb. 20, 12:30-1:30 p.m. (one signing only)
Patti LaBelle is a New York Times bestselling author, award-winning recording artist and star of the cooking television series, “Pattie LaBelle’s Place.” This performer is just as captivating in the kitchen as she is on stage with her cooking show and cookbooks filled with southern-style recipes, including her recent book, “Recipes for the Good Life.”

Terrence Roberts, author of “Lessons from Little Rock”
Saturday, Feb. 27, 1-2 p.m. and 3-4 p.m.
Terrence James Roberts, Ph.D. is one of the “Little Rock Nine,” a group of history-making African American students who, in 1957, were the first black students ever to attend classes at Little Rock Central High School in Little Rock, Ark. Roberts was awarded the Congressional Gold Medal by President Bill Clinton in 1999. His book, “Lessons from Little Rock,” is a memoir of his experience during the integration of Little Rock Central High School and the lessons learned from that historic episode.

“Re-Discovering America: Family Treasures from the Kinsey Collection,” a collection of pieces displayed at the American Adventure pavilion at Epcot, draws from an extensive assortment of rare art, documents, books and artifacts attributed to African American history. Bernard, Shirley and their son Khalil Kinsey share some of their vast personal collection of artifacts spanning 400 years of history. Touch screens and guest-activated lanterns with narration by Whoopi Goldberg, Diane Sawyer and other celebrities help bring the history to life.

Three new pieces recently have been added to the exhibit which is open daily:
• “Banneker’s Almanack and Ephemeras” by Benjamin Banneker, is the mathematical and mechanical work of Benjamin Banneker. Thomas Jefferson, then Secretary of State, read and approved of Banneker’s work. The almanac was published in 1771.
• “My Bondage and My Freedom” by Frederick Douglass, is an autobiography recounting Frederick Douglass’s life as a slave and that as a freeman. Published in 1855, the book is a first edition.
• “Survivor” by Elizabeth Catlett, is a Linoleum block print inspired by a photograph taken by Dorthea Lang titled “Ex-slave with a Long Memory.” The print was created in 1983.

As guests explore the American Pavilion Rotunda, they are greeted by images of influential men and women who contributed to the progress of America. New portraits have been added to the collection for the month of February to further illustrate the contributions of many African American notables.

Mrs. Abby Fischer was one of the first African American authors to publish a cookbook dating back to 1881. “What Mrs. Fisher Knows About Southern Cooking,” includes 160 Southern-style recipes. One popular dessert recipe featured in the cookbook, Mrs. Fisher’s Peach Cobbler, is available for guests to purchase and enjoy at Liberty Inn at the American Adventure Pavilion.

“Re-Discovering America: Family Treasures from the Kinsey Collection” is included in Epcot admission. For more information about the collection, visit TheKinseyCollection.com.

Photo Finds: Take a look at this...