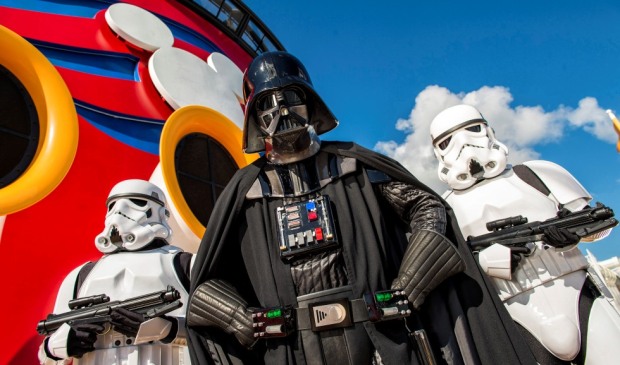 Disney Cruise Line guests aboard certain Disney Fantasy sailings in 2016 can celebrate the adventures and characters from the Star Wars saga during a new, day-long celebration called Star Wars Day at Sea.

Marking the first official appearance of the heroes and villains of Star Wars aboard a Disney Cruise Line ship, Star Wars Day at Sea combines the power of the Force, the magic of Disney and the excitement of cruising for an out-of-this-galaxy experience unlike any other.

Occurring one day during each of eight Disney Fantasy sailings, Star Wars Day at Sea will transport guests to a galaxy far, far away — in the Western Caribbean. The event features a full day of Star Wars celebrations, including a deck party, meet-and-greets with characters, Star Wars-themed youth activities, unique food and beverage offerings and special merchandise.

Throughout the day, Star Wars Younglings, Padawans and Jedi Masters alike will enjoy the entertainment. Intergalactic highlights include:

• Darth Vader, Chewbacca, Boba Fett, Stormtroopers and other characters from across the Star Wars galaxy will be onboard for scheduled meet and greets, as well as roaming on deck and elsewhere around the ship. Guests also are encouraged to dress up in their own costumes.

• A shipboard version of the popular Jedi Training Academy experience invites young Jedi hopefuls – known as “Padawans” – to learn lightsaber moves from a Jedi Master. They can then use the Force and face off in a final test against Darth Vader.

• For Younglings, Star Wars-themed arts and crafts, games and activities will be offered throughout the day in Oceaneer Club and Oceaneer Lab youth clubs.

• In the evening, adults entering the night club will feel like they stepped into the Mos Eisley cantina scene. Characters and cantina music set the mood as Star Wars-themed specialty cocktails are served.

• On each of the special sailings, celebrities and insiders from the Star Wars galaxy will share their experiences, meet fans and sign autographs.

There’s intergalactic fun when the Star Wars deck party blasts off to an evening filled with music, dancing and games. Star Wars characters converge on the deck stage for a celebration of the Star Wars saga in a show featuring special effects and guest participation. The deck party culminates in a display of themed pyrotechnics, lighting, sound effects, lasers and Star Wars.