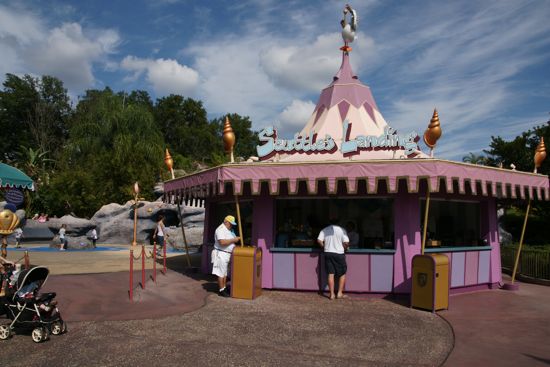 Guests at the Magic Kingdom may notice a few new construction walls and changes at the park starting today. Disney has begun working in the guest areas as part of the expansion to Fantasyland Forest and a Pixie Hollow area.

We’ve previously reported on Disney’s plan to double the size of Fantasyland in our Winter 2010 issue and online. While work has been ongoing behind the scenes, today marks the first real sign of any changes in the guest areas.

Disney has begun work on a construction wall that will run from the Fantasyland Pavilion area to the entrance area of Toontown.

For now, Ariel will not be doing meet and greets, but she can be seen in the Celebrate a Dream Come True parade and SpectroMagic at Magic Kingdom as well as the Voyage of The Little Mermaid show at Disney’s Hollywood Studios. Ariel will have a new grotto greeting location once that part of the expansion is complete. A ride called “Under the Sea: Journey of the Little Mermaid” will also be part of the expansion.

Until May 9, guests can meet Winnie The Pooh and his friends next to the train station in Toontown. After that, Pooh and Tigger will be greeting guests in Town Square.

Taking the place of Scuttle’s Landing, Enchanted Grove will now be selling coffee and muffins during Extra Magic Hour mornings.

The first part of the project is expected to be complete in 2012 with the Pixie Hollow area to follow in 2013.

Here’s the video of the Fantasyland expansion announcement at last year’s D23 Expo.