Characters in Flight Balloon Video, Photos, and that Pesky Wind 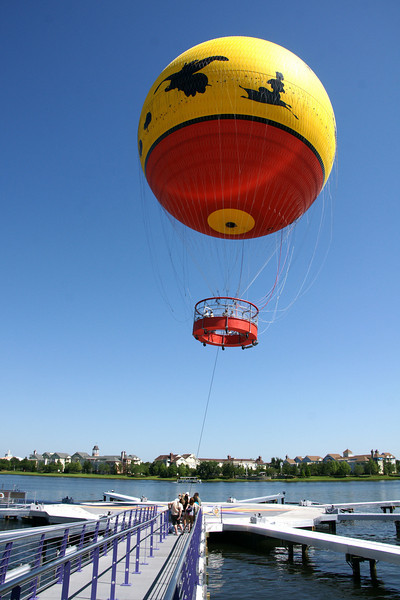 The balloon, operated by Aerophile, takes up to thirty guests 400 feet in the air for around five minutes, providing 360-degree views of all of Walt Disney World and the surrounding Orlando area.

One of the most-discussed aspects of Characters in Flight so far has been the fact that medium-to-high winds (which often feel like nothing more than a nice breeze) can ground the balloon for an unspecified amount of time. Until a couple of days ago, the attraction seemed to be closed more than it was open. Even on its official opening day, invited media were unable to ride due to the winds.

However, the winds have calmed down over the last couple of days and by 1 p.m. yesterday, Aerophile had already taken over 300 guests up into the skies above Walt Disney World.

But Orlando certainly has its fair share of windy days, so to help you figure out if a trip to Downtown Disney to take a ride on Characters of Flight is a good choice, we’ve included a handy wind watcher on our new Characters in Flight guide. The wind speed and direction are gathered from a meter located at the Reedy Creek fire station, just down the road from Downtown Disney, so you can get the most accurate wind information possible before venturing out.

So how far can you see when you’re 400 feet in the air? You can easily spot Spaceship Earth at Epcot, the Tower of Terror at Disney’s Hollywood Studios, the Contemporary Resort, Space Mountain at the Magic Kingdom, and even downtown Orlando in the distance – normally a 30-40 minute drive away from Walt Disney World.

For a better idea, check out this panoramic photo shot by Orlando Attractions Magazine photographer Matt Roseboom while up in the balloon. Be sure to click on the image below to open a larger version in our photo gallery.

To hear what they had to say about the new high-flying attraction at the ribbon-cuttong ceremony as well as learn a few interesting facts about the balloon and see the sights from 400 feet in the air, watch this video:

You can also download a copy of this video in our Video section, in both standard- and 720p high-definition.

For those Southern Californians who want a peak at the same technology (on a much more reliable schedule), check out the Wild Animal Park in Escondido! That balloon ride takes you over Savhannas of Africa and Asia.

We locate at Thailand and we are interesting with your ballons. That is why we have several questions:
1) How can you deliver ballon to Thailand & how long does it need?
2) how long time it need to montaje it after deliver
3) how many people should work with it at the same time
4)we need all details about expluatation
5) what should be weather conditions for flight
6) do you provide education lessons for using baloon or how can we lern it
7) can you send us all lisens you have for using this baloon
8) how many square meters of territory it need for use 1 baloon
9) price

We locate at India, Mumbai and we are interesting with your ballons. Have few questions:

1) How can you deliver ballon to India & how soon can we get the same delivered?
2) How long time it need to montaje it after deliver
3) Man power needed for day to day operations
4) We need all details about expluatation
5) What should be weather conditions for flight
6) What after sales supoport do you provide, like training.
7) Can you send us all licens you have for using this baloon
8) How many square meters ground coverage needed for use 1 baloon
9) Number of passengers carrying capacity?
10) How many hours a day it can be operated?
11) … and not least 😉 Cost