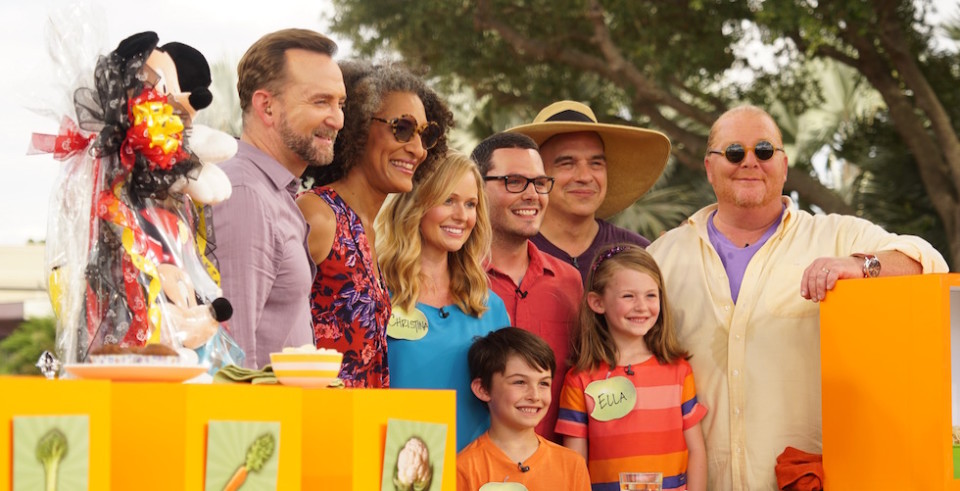 For the first time ever, ABC’s daytime talk and food show “The Chew” filmed a week of shows from Walt Disney World this past week, which will air on ABC Oct. 12-16.

Co-hosts Mario Batali, Michael Symon, Carla Hall and Clinton Kelly had a magical experience with Disney World food, rides and one-of-a-kind experiences, including visiting Animal Kingdom and buckling in for a high-speed adventure at Test Track. The main parts of the shows were filmed at Epcot, coinciding with the International Food & Wine Festival.

Guests included Alfonso Ribeiro (ABC’s “AFV”) and Bellamy Young (ABC’s “Scandal”). “The Chew” also surprised its live audience with appearances from classic Disney characters Mickey Mouse and Goofy and a performance from the cast of Disney’s “Festival of The Lion King.”

MONDAY, OCTOBER 12 – “THE CHEW’S FAMILY VACATION” – Carla Hall makes a Norwegian roasted salmon and ranch potato galette; Michael Symon visits The Land at Epcot to check out the center’s hydroponic gardening program and makes a meal with its vegetables; Mickey Mouse and Goofy stop by to say hello.

FRIDAY, OCTOBER 16 – “YOUR PERFECT PARTY PLAN” – The perfect party snacks and cocktails; “The Chew” co-hosts stop by the Rockin’ Burger Block Party; a look back at some of the show’s favorite moments at the Epcot International Food & Wine Festival from Walt Disney World.

For a behind the scenes look at the filming and an interview with the hosts, watch the Oct. 15, 2015 episode of Orlando Attractions Magazine: The Show. For more information on “The Chew,” visit TheChew.com.

Out Of The Loop: Two seven story...