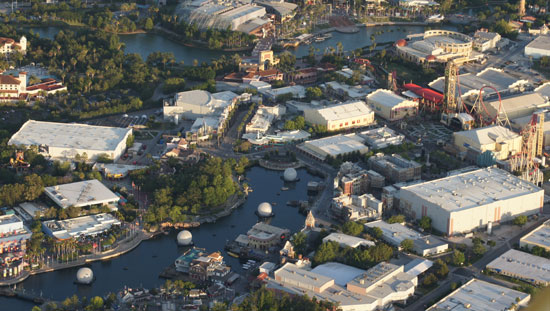 This aerial photo from April 2011 shows four spheres in the Universal Studios Florida lagoon. These spheres were removed a few weeks ago and have not returned. The four-story-tall, 360-degree projection “cinespheres” were featured in the seasonal “Universal 360” closing fireworks show. The spheres also were used some years in Halloween Horror Nights, and were nicknamed by Horror Nights characters Bill and Ted as “the movie balls”. 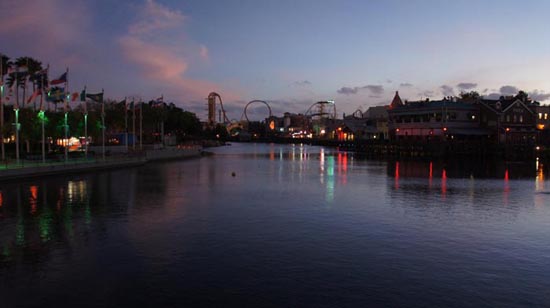 This is the Universal Studios Lagoon last Wednesday night, Oct. 19. Normally all four spheres are visible from this location, stretching into the distance, and adding scale to the height of the Hollywood Rip Ride Rockit roller coaster. 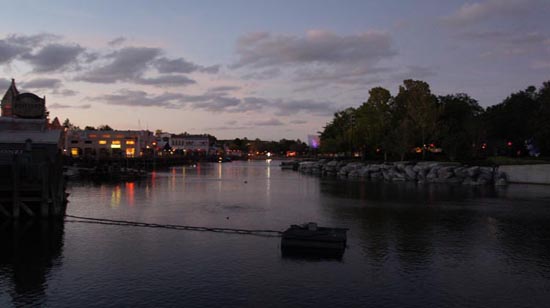 View from the opposite side of the lagoon. In the foreground is a platform used to launch fireballs, as part of this year’s Horror Nights theming. 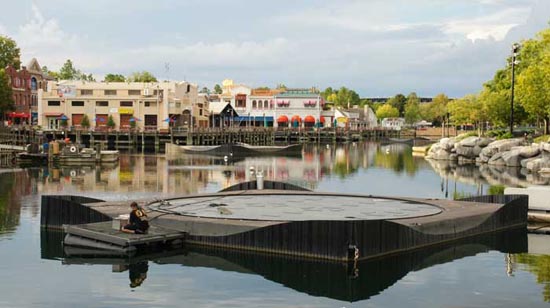 The sphere fabric was removed from the floating platforms last month, as seen here on Sept. 24. It did not seem unusual at the time that the sphere fabric had been removed. The spheres have had similar maintenance or replacement over the years. The technician seen here is preparing the fireball platform. 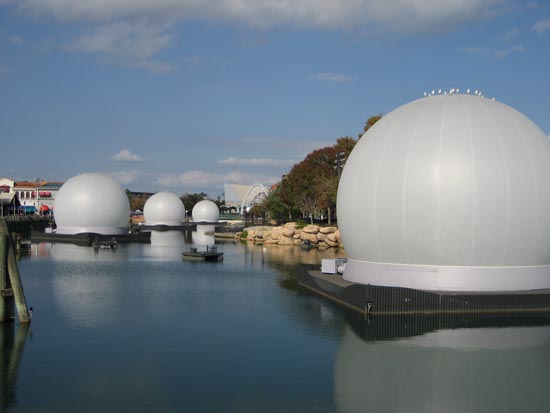 It may be interesting to take a look back at the history of the movie balls. They were added to the lagoon in 2006. 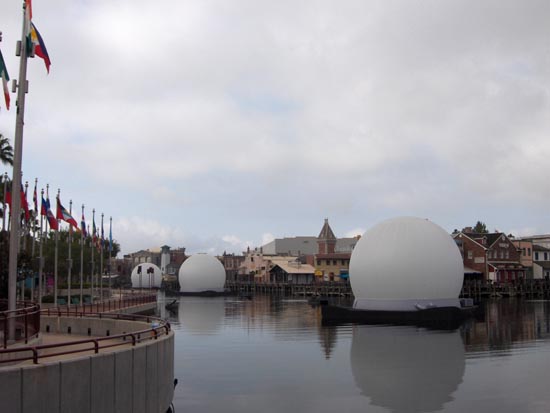 This photo is also from 2006. Note how different the horizon is without Hollywood Rip Ride Rockit. 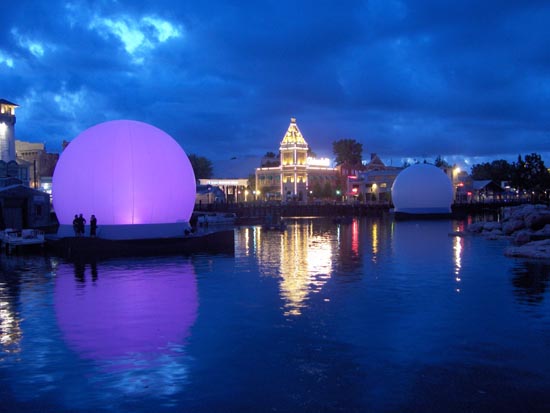 These photos are from June 2006. The spheres being tested. Cinesphere 360 officially debuted a few days later, for the July 4 holiday. 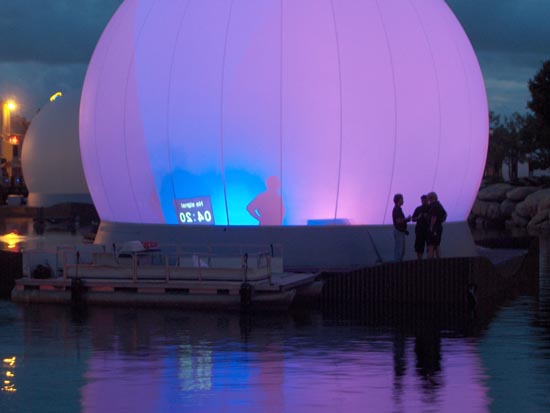 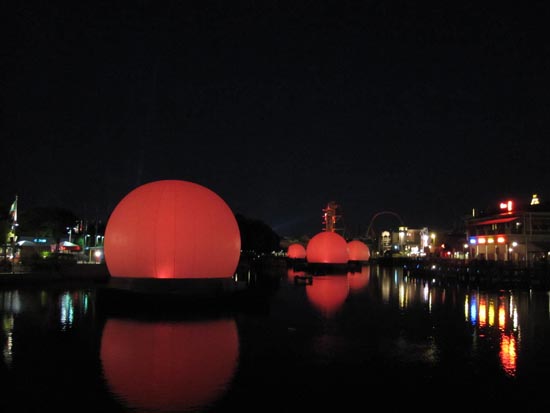 During the preshow, the spheres slowly changed color. 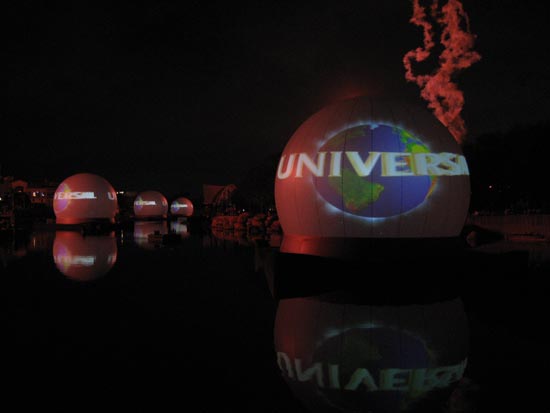 The show itself combined movie clips with fireworks.

Here’s a video from last year of the show: 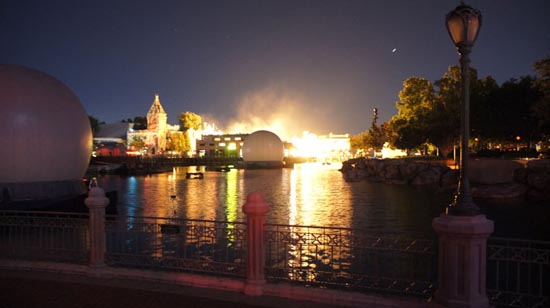 One year there was a special Cinesphere 360 show for Halloween Horror Nights. In some years, movie clips ran continually. This photos shows a fireball exploding in last year’s Horror Nights theming. 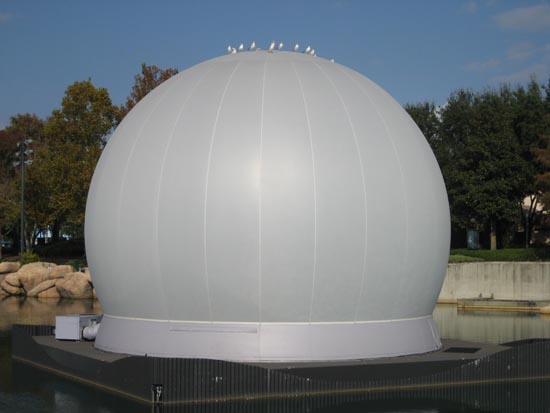 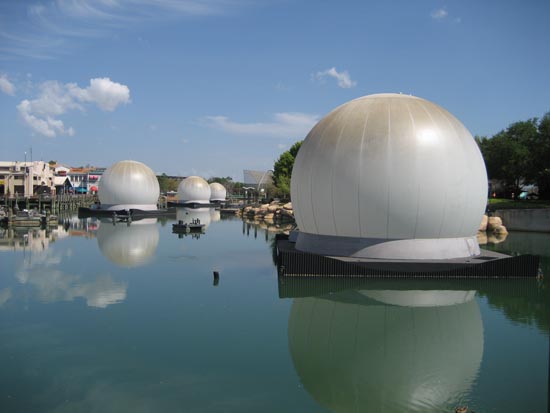 But over time, the fabric would begin to discolor, almost like a sunburn, and need maintenance or replacement. 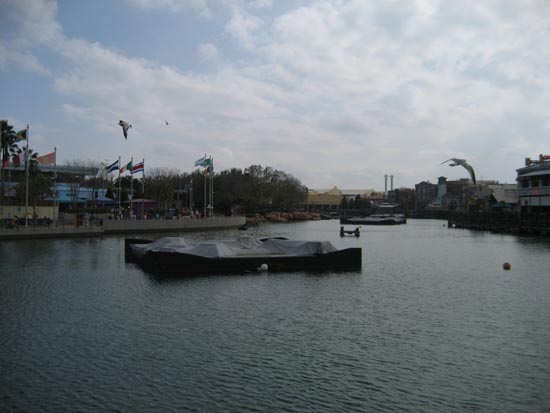 In off season originally, the sphere fabric was removed from the platforms, and the support equipment was covered with tarps. 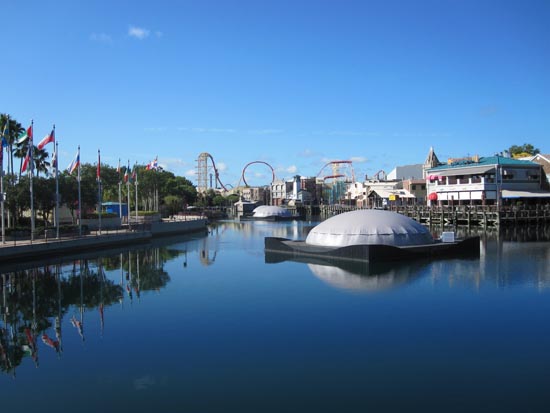 In off season the last couple of years, the spheres were just deflated and protected by tarp domes. 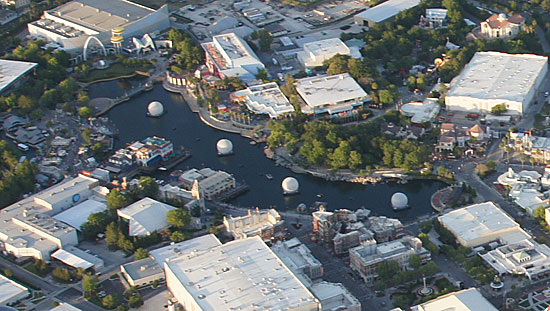 This view brings to mind a joke told during the 2006 Bill and Ted show at Halloween Horror Nights.

In the show, parody Lex Luthor threatened to launch nuclear warheads that he had built at Universal. A quick video clip showed the rockets standing, underneath the lagoon surface. The joke was that movie balls were the exposed round nose cones of the rockets, ready to be launched. 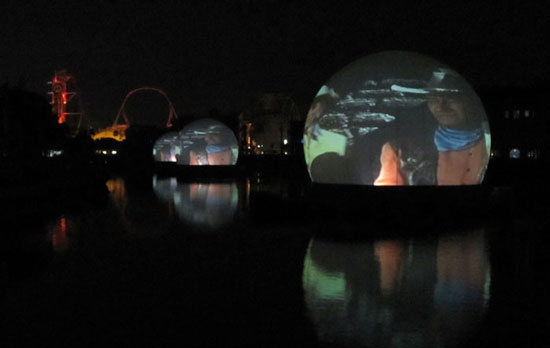 It’s unusual that the Cinesphere 360 spheres were removed from the lagoon. Will they return? Will something else take their place? Stay tuned … We’ve heard some good rumors.

UPDATE Oct. 31, 2011: It seems the barges haven’t been removed completely. Three of the four can still be spotted set over to the side of the lagoon. 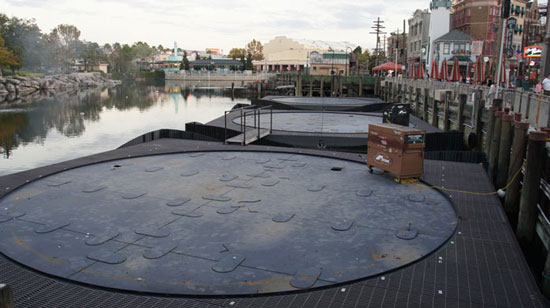 The barges are still in the water, parked next to Richter’s right now. I would guess they are finally being replaced with something new.

Such a good post, I hope they come back. Watched the video and loved it. I know if they had something like this again I would be more then likely to take a trip down there. Hopefully we hear something good soon!

Movie Review: Relive the day in a...

Fans excited once finally inside The Wizarding...