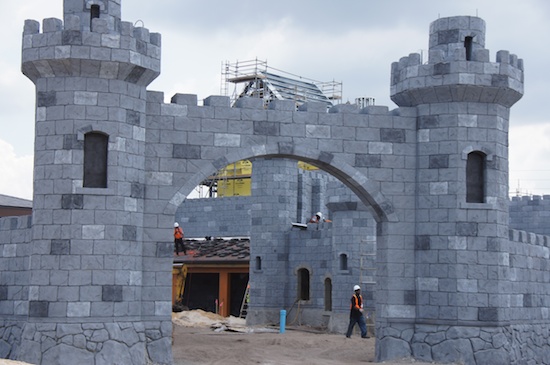 We were invited on another hard hat tour of Legoland Florida yesterday. This was our first that really showed signs of what’s to come. Legoland Florida opens to the public in about two and a half months on Oct. 15 in Winter Haven, Fla. The 150 acre family theme park will feature more than 50 rides, shows, attractions and of course, plenty of Lego citizens.

The first stop on our partial tour was the Castle Hill Zone. It seems many great theme parks have their own castle and Legoland is no exception. The castle shown above will feature “The Dragon”, a roller coaster that will take riders inside and outside the castle. 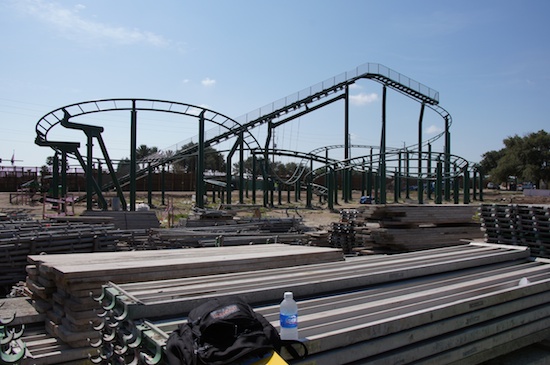 Here’s a look at the outdoor portion of The Dragon coaster. 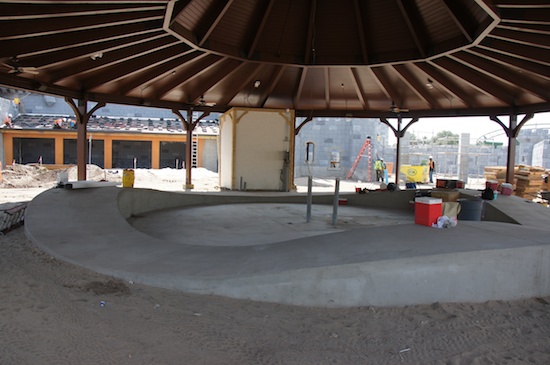 On top of this circular up and down pad will be a ride for the smaller kids called “Merlin’s Challenge”. It sits inside the castle walls. 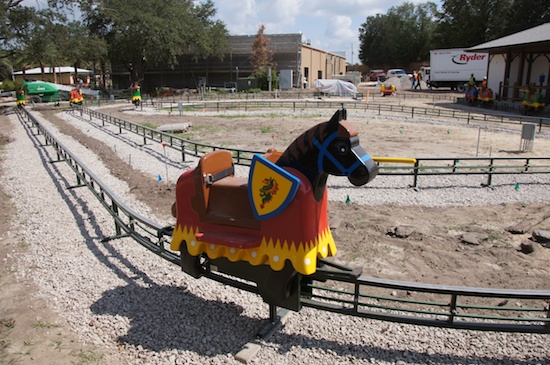 This “Royal Joust” ride sits to the left of the castle. Kids under 90 pounds can ride these royal horses around the track. In our video at the bottom of this update, you can see the horses bouncing up and down and whinnying as they go around. 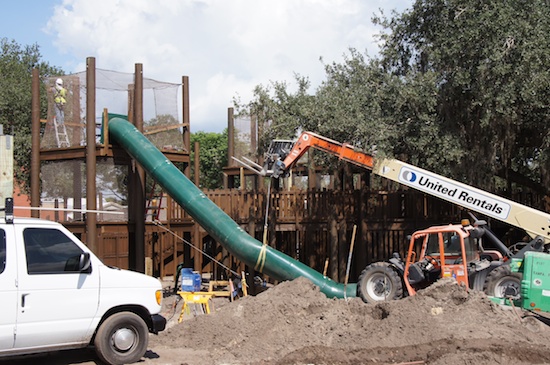 Across from the Royal Joust is “The Forestmen’s Hideout”, a multi-level kids climbing and sliding area. 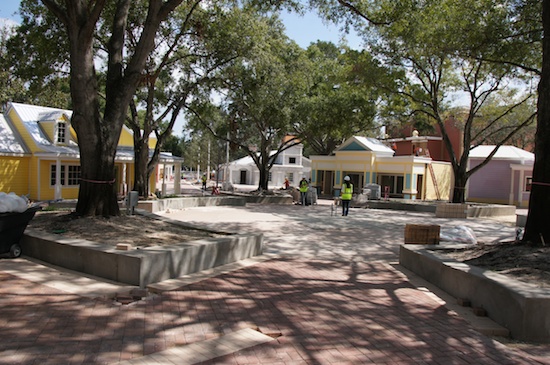 The next stop on our tour was to one of the first areas you come into when you enter the park, Fun Town. Here in the middle of these trees will be a two-story carousel. You’ll also be able to buy Lego’s popular Granny’s Apple Fries from a building nearby. Fun Town is where most of the shops and restaurants will be located. 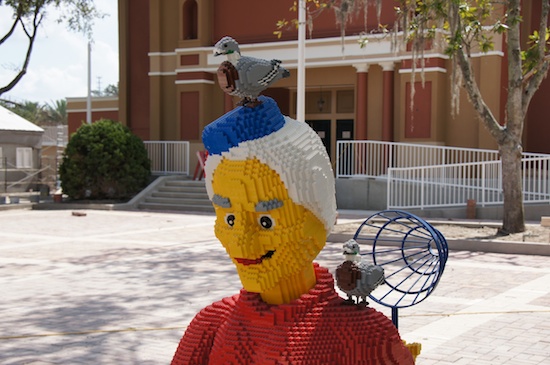 A few Lego citizens were already installed around Fun Town, including this old lady who likes to eat pigeons. She’s standing with her net outside the 4D Theater. 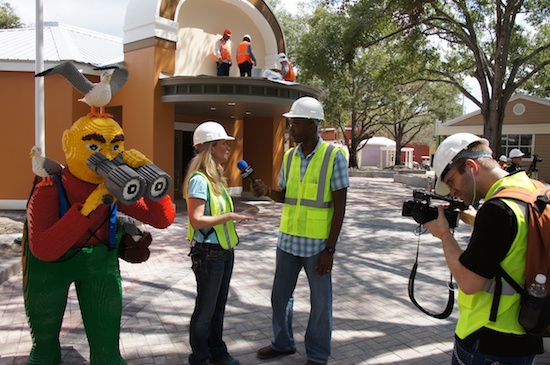 The Lego guy on the left has been dubbed “Bird Man” by the employees and construction workers. He seems like a bird lover. I hope he doesn’t run into the old lady in front of the 4D theater. The store in the background is the Studio Store where the licensed Lego products will be sold such as Disney and Harry Potter Lego sets. Look for our full report and interviews on the upcoming episode 37 of Orlando Attractions Magazine – The Show. 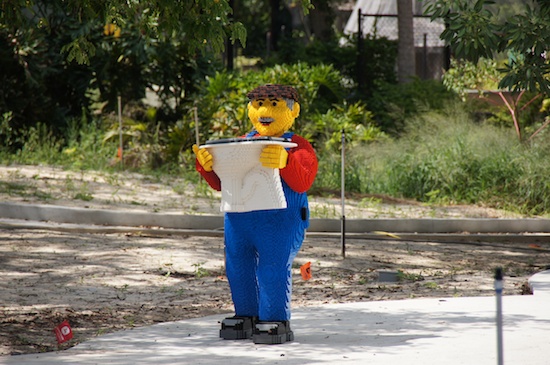 Yes that’s a toilet in the Lego guy’s hands. Of course, he’s right outside some restrooms. 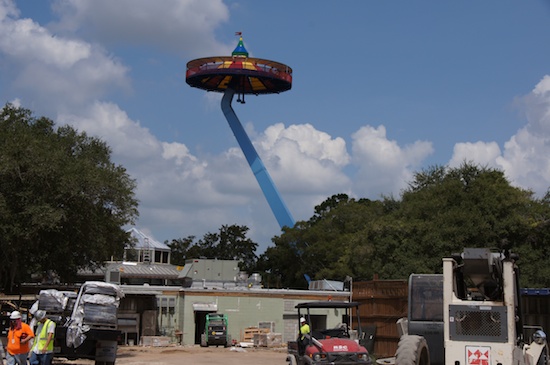 Next up, we were honored to be one of the first people to ride the “Island in the Sky” ride. This ride is a holdover from Cypress Gardens. It takes guests 150 feet up on a gentle spin around to get an overview of the park and surrounding areas. The rest of my photos and the video below were taken from the ride. 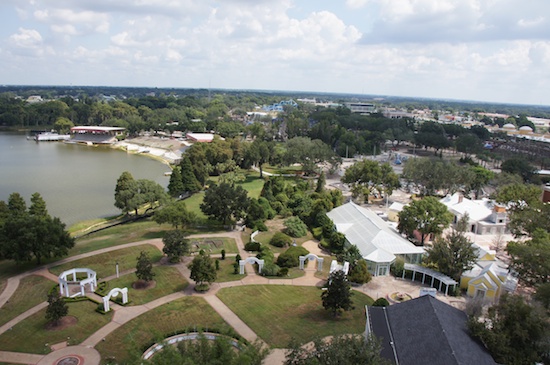 You can see the gardens and water ski stadium are still around and will be used once the park opens. Look for the ski show to be Lego-themed of course. 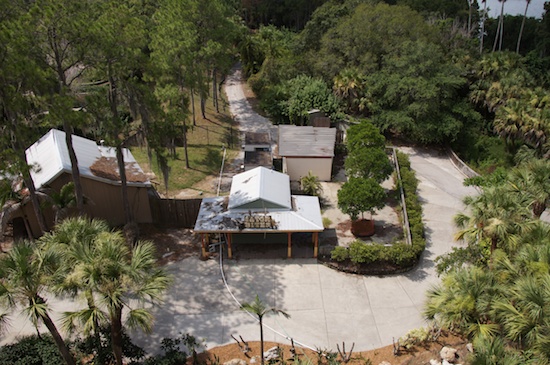 From the Island in the Sky ride, you can look down onto the area that used to house many animals when the park was Cypress Gardens. This area will remain closed when Legoland opens, but they’ll probably make use of the land sometime in the future. 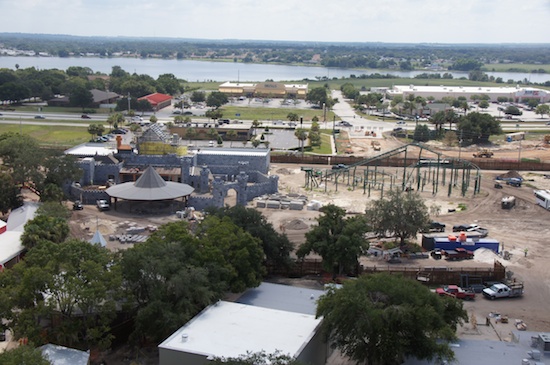 Here you can see the Castle Hill zone and further outside the park’s boundaries to the shops nearby. 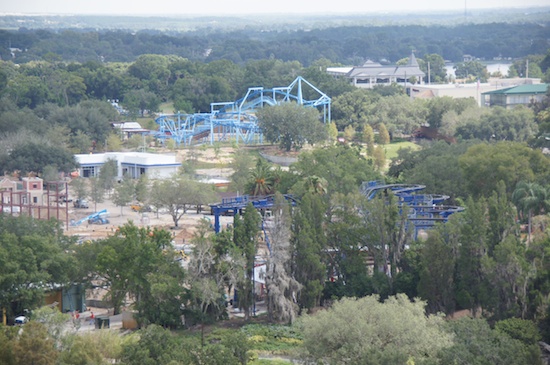 Looking towards the back of the park, you can see a couple of roller coasters. The one farthest away is a suspended coaster and the one in the foreground is the “Lego Technic Test Track”. 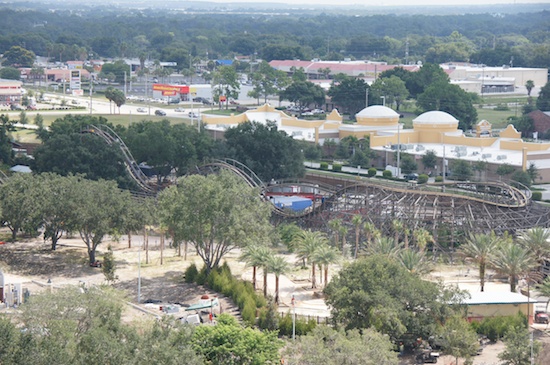 This wooden coaster used to run at Cypress Gardens. When Legoland opens it will be called “Coastersaurus”. 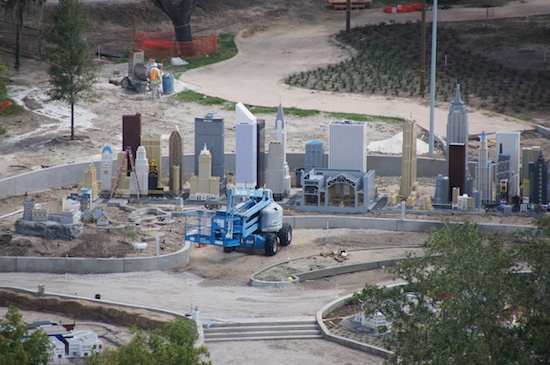 Here’s a zoomed-in look at Miniland USA. It will feature miniature buildings from Washington, D.C., New York City, Las Vegas, Florida and more, all made out of Legos.

Here’s quick video overview taken from the Island in the Sky ride, with a closer look at the “Royal Joust” ride running at the end:

Kids can train to be knights this month at Medieval Times

Thanks so much for sharing the fun! Now I would love to visit Lego Land. I live here in Florida, and can’t wait for my grandchildren to visit me! Yes I would love to visit with them as they are avid fans of Lego’s. It looks like a fun place and much to do for everyone. Again, thank you for sharing for what is to come! Can’t wait to see what great things this will bring to our area!