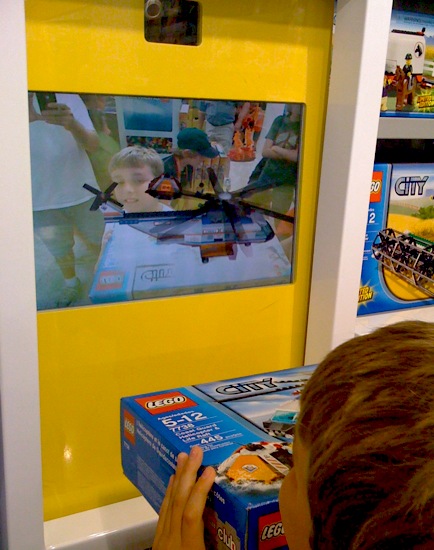 I stopped by the Lego Imagination Center at Downtown Disney tonight and noticed this very cool Digital Box display.

If you hold certain Lego boxes up to the camera, it’ll show you an animated 3D model of the completed set right on top of the box you’re holding. This augmented reality technology is from a German company called Metaio and they’re testing the display at Lego stores worldwide.

Here’s a short clip of it in action.

Funny technology !
But what’s the meaning of this ? With Lego the children have to construct !! Here again are they’re playing with videogames! (with cheap graphism) (=

This is another bit in the unfolding tech of augmented reality. I have seen this Lego kiosk in person and it really hits the mark. Allowing not only a child but also their parents and grandparents to see what is in the box and if it moves. A very visual way to “see” what something can do.

@Chris
HAHAHA!
XD
XD
XD
THAT TECHNOLOGY SURE IS FUNNY, EH, MKARA?
HAH!
FUNNY
RIGHT?
RIGHT CHRIS??
Leave ’em be, Chris. It is funny technology. YOU’re an idiot: “allowing not only a child but also their parents,” etc. NO, RLY?? ADULTS CAN SEE IT TO? I THOUGHT THEY HAD SOME SORT OF FILTER IN THEIR EYES THAT KIDS DON’T HAVE THAT PREVENT THEM FROM SEEING IT!

ParkSAVER: Sequined glove may not change the...