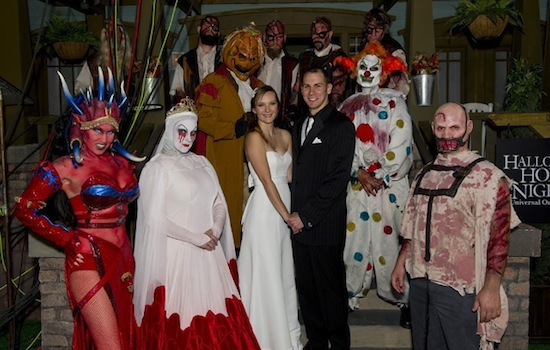 For the winners of Universal Orlando’s first-ever Halloween Horror Nights Wedding contest, “until death do we part” brought on a whole new meaning. April Richardson and Adam Cochran shared their special day with family and friends – and chainsaw weilding maniacs and other scary and undead weirdos. 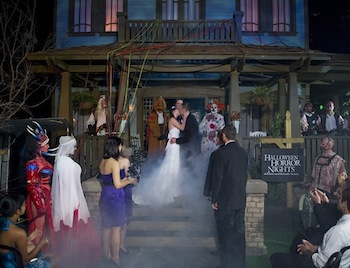 The wedding took place on the steps of The Legendary Truth haunted house. Cold fog and the sounds of an eerie bridal march filled the air as April walked down the aisle. Frightening scareactors lurked throughout the ceremony as the bride and groom exchanged their vows. Once the couple was announced husband and wife, the wedding guests cheered as scareactors snarled and the sounds of chainsaws from the Chainsaw Drill Team erupted.

The newlyweds then boarded a hearse and rode to the wedding reception. The Chainsaw Drill Team escorted the hearse as it slowly processed through Universal Studios, followed by the wedding guests dressed in black cloaks.

At the reception, everyone enjoyed a three-tier cake decorated with spider webs and a skull cake topper. The entire wedding party then experienced the horror of Halloween Horror Nights firsthand.

Here are some clips of the horrific wonderful night: 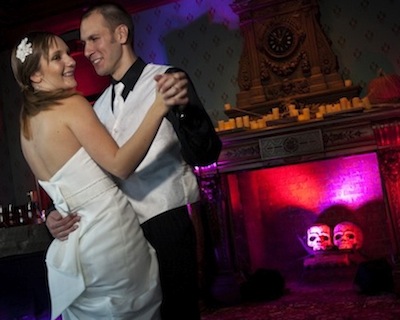 April and Adam met six years ago in college and were engaged in May 2010 following his proposal in the arboretum at their alma mater, the University of North Carolina at Chapel Hill. Over the years, Adam, a pharmacist, and April, a graphic designer and aspiring writer, have celebrated Halloween much like many celebrate other major holidays – by sending out dramatic Halloween-themed photo cards of themselves, and holding annual Halloween parties and scavenger hunts. The self-described “quirky” and “creative” couple says that getting married at Halloween Horror Nights is a dream come true, as the annual event is their “holy grail of Halloween celebrations.”

Adam was born in Virginia and April was born in Connecticut. Both grew up in North Carolina and they currently reside in Vermont. 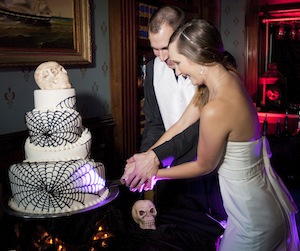 April and Adam’s wedding was the first of the new Halloween Horror Nights themed wedding packages now offered. Universal also offers customized weddings at more than 25 unique locations around the resort. For more information or to start planning a wedding, vow renewal or engagement, visit UniversalOrlandoWeddings.com or call 1-888-331-9108. 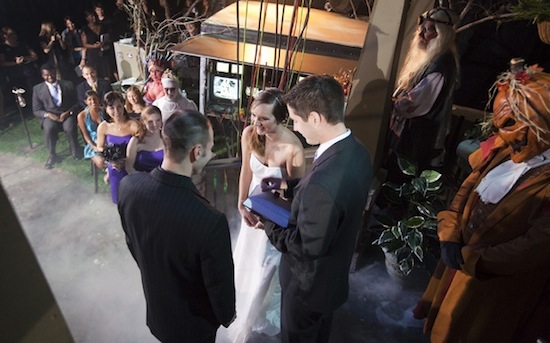 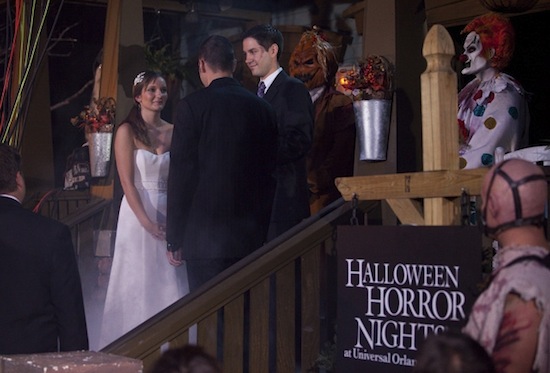 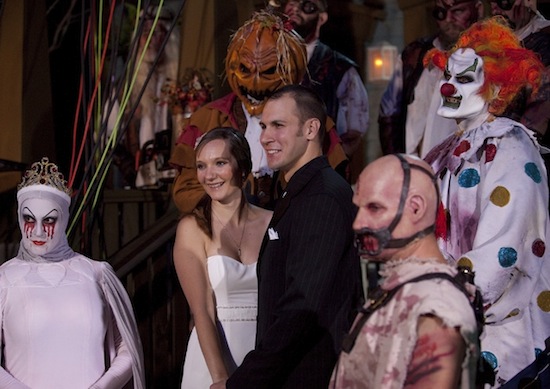 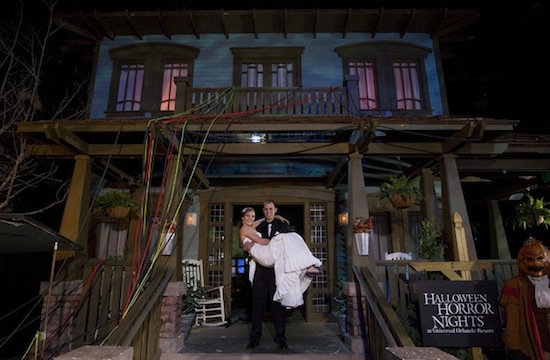 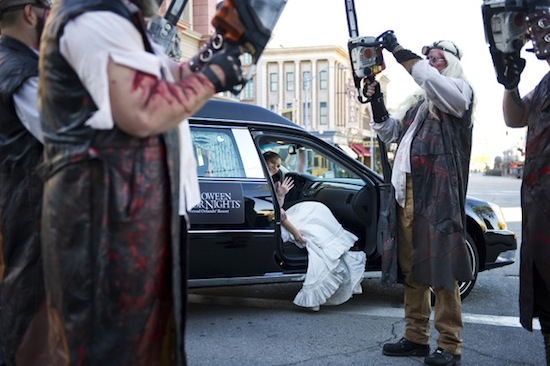 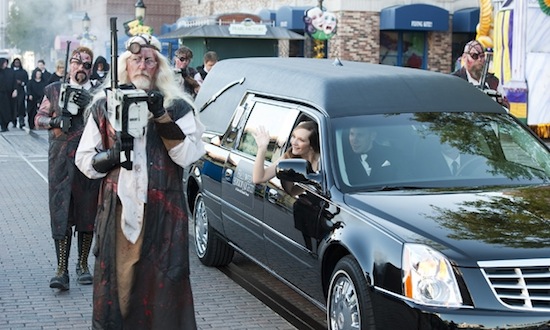 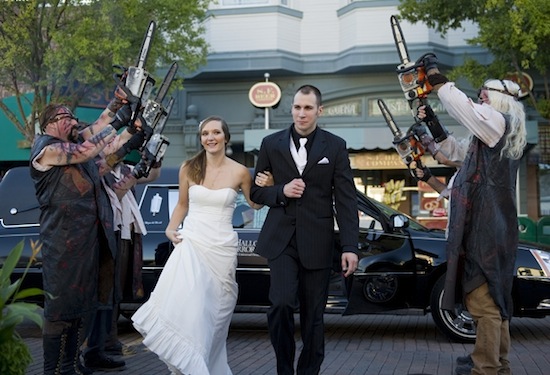 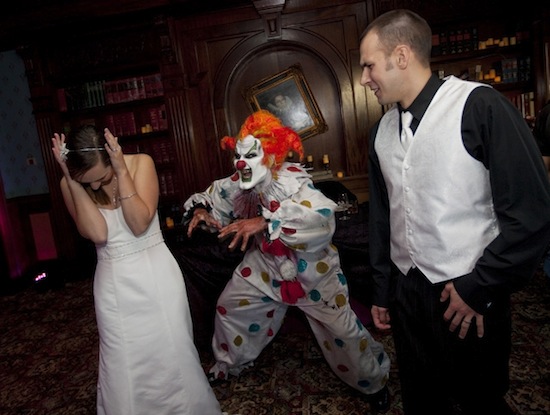 I was going through your blog and your blog posts are great especially the one on Halloween celebrations in Orlando.

In fact, we have been blogging about Halloween 2010 celebrations for our client Hotel Worldquest Orlando too.

It would be great if we can get this link on your blog.

Let me know what you think and what the best way to have a presence on your blog is?

It looks good Bhawna.
The best way to have a presence on our blog is to buy an ad. You can find more info here: https://attractionsmagazine.com/advertise.php

this is amazing im trying to find the give away and rules for this year 2012 i want nothing more than to be married at halloween horror night on halloween. its my favorite holiday and me and my fiance are “dying” to get married lol any help would be appropriated thank you

Does your blog have a contact page? I’m having a tough time locating it but, I’d like to shoot you an email.
I’ve got some suggestions for your blog you might be interested in hearing. Either way, great site and I look forward to seeing it grow over time.

The first wedding was in 1992. Aimee Judway and Raymond Foster were married on the Thunderdome Stage with the Munsters as the wedding party. Grandpa Munster waled the bride down the aisle and Herman Muster was the best man.

Everything you need to know about Knott’s...