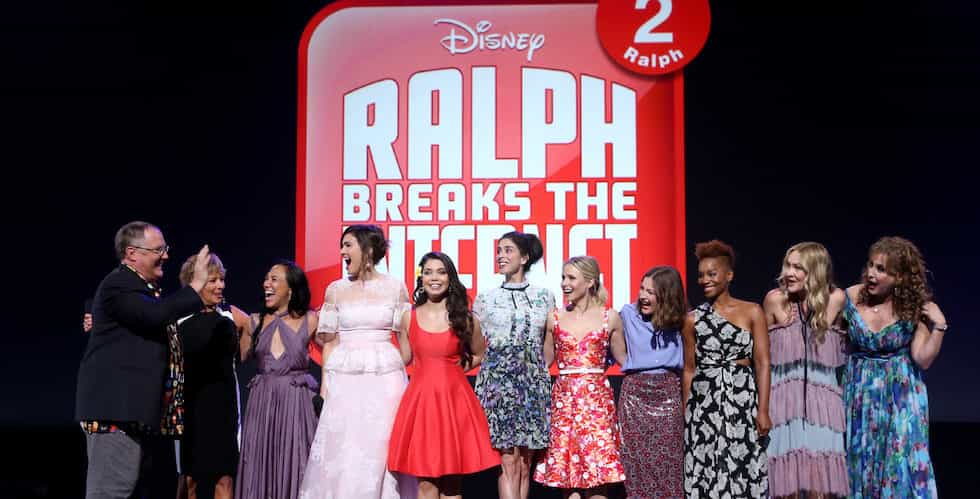 The biggest surprise of the panel included the largest gathering of Disney Princesses in Disney history.

Filmmakers from Walt Disney and Pixar Animation Studios did not disappoint at D23 Expo 2017 today, as they revealed new details and scenes from upcoming films, as well as a few surprise guests.

John Lasseter, the Chief Creative Officer for Pixar and Walt Disney Animation Studios, joined forces with the talent and filmmakers of both studios to bring new footage, images and details from some of Disney’s upcoming films to D23.

“I’m so excited about our upcoming movies; they are all hilarious, emotional, beautiful and make you think,” said Lasseter. “It’s a great mix of incredibly creative and surprising new worlds and characters and stories we love returning to. Our filmmakers are putting so much heart into these films – I can’t wait for people to see them.”

Guests to the Animation Panel were given the first-ever public performance of the song “Remember Me” from the upcoming Pixar Animation Studios film, “Coco.” Performed by Anthony Gonzales, who voices Miguel in the film; and Benjamin Bratt, who lends his voice to Ernesto de la Cruz, the song was written by “Frozen” duo Kristen Anderson-Lopez and Robert Lopez.

“Our film embraces a broad landscape of music,” said director Lee Unkrich. “We were fortunate to have Kristen and Bobby create ‘Remember Me’ – it’s the signature song made famous by Ernesto de la Cruz, and it embodies the key theme in our story: the importance of remembering loved ones in both life and beyond.”

Kristen Bell, the voice of Anna in “Frozen,” introduced the next presentation with the new holiday featurette, “Olaf’s Frozen Adventure.” Josh Gad also arrived to surprise guests with a performance of the all-new original song “That Time of Year,” written by Elyssa Samuel and Kate Anderson. This new short will air in front of Disney-Pixar’s “Coco” on Nov. 22.

Next, Lasseter returned to the stage to discuss the return of the long-awaited “Incredibles 2.” Lasseter previewed a short clip of what the fashion world thinks of Edna Mode – stylist to the super heroes, who was first introduced in the original 2004 film.

“Incredibles 2” director and voice of Edna Mode, Brad Bird, joined Lasseter onstage to provide a few details about the upcoming film, which will put the family in an expanded universe that includes new supers, and a brand-new villain.

“‘Incredibles 2’ is really a family film, it’s just that the family happens to have super powers,” said Bird. “They may have super speed or super strength, but they experience the same problems as any family.” “Incredibles 2” flies into theaters on June 15, 2018.

One of the biggest uproars from the animation panel came from “Ralph Breaks the Internet: Wreck-It Ralph 2,” as directors Phil Johnston and Rich More, as well as Emmy-winning actress and comedian Sarah Silverman, who voices Vanellope von Schweetz.

Fans present at the presentation were the first to see the global debut of a scene from the film that honors the Disney Princesses. Lasseter revealed to guests that the filmmakers had asked the original voices of the princesses to return to their roles for a sequence that no Disney fan could forget.

Returning to their roles were Auli’i Cravalho (“Moana”), Kelly MacDonald (Merida in “Brave”), Anika None Rose (Tiana in “The Princess and the Frog”), Kristen Bell (Anna in “Frozen”), Mandy Moore (Rapunzel in “Tangled”), Paige O’Hara (Belle in “Beauty and the Beast”), Linda Larkin (Jasmine in “Aladdin”), Irene Bedard (“Pocahontas”) and Jodi Benson (Ariel in “The Little Mermaid”). Each actress then joined the stage for what was the largest gathering of Disney Princesses in history.

Lasseter also revealed details about upcoming untitled Disney films, including an untitled DisneyToon Studios film that takes audiences through the history of aviation, set to open on April 12, 2019; “Toy Story 4,” directed by the “Riley’s First Date?” short’s Josh Cooley, which is set to release on June 21, 2019; “Frozen 2,” with a title to be determined, slated for a November 27, 2019 release; and an untitled Dan Scanlon movie about two teenage elves who set off on a magical adventure to spend one last day with their father, who passed when they were young.

Gaylord Palms announces Christmas Around the World as this year’s Ice! theme