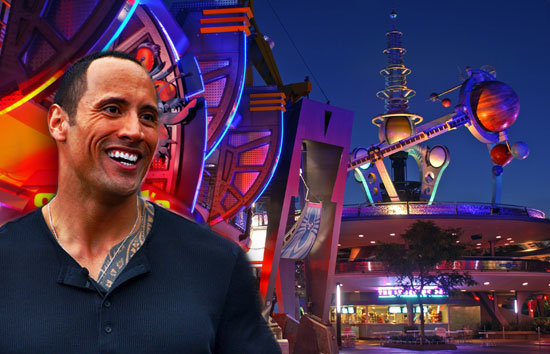 With the success of Disney’s Pirates of the Caribbean trilogy, based on the theme park ride of the same name, it’s no surprise that more park-inspired films are on the way. Rumors of a Jungle Cruise movie have been bouncing around the Internet for many months, but it now appears that Tomorrowland may be the inspiration for the next in the series.

Screenwriters Jon Lucas and Scott Moore told reporters that they have finished a draft of a script for Tommorrowland—the upcoming Disney sci-fi movie that will star Dwayne Johnson—and, like the theme park area for which it is named, it will posit a bright and shiny future.

The writers participated in a group interview in Las Vegas on Sunday to promote The Hangover. The following Q&A features edited excerpts of the interview. Tomorrowland is eyeing a 2010 release.

What are you guys working on writing?

Lucas: There are meetings every now and again where you can see the gears turning. It’s like, “Well, if we had a mountain in this movie, it would be really easy to call this [Space Mountain].” Tomorrowland is actually a pretty cool title, even though that section of the [Disneyland/Disney World] park is not maybe [as futuristic anymore]. It’s like, “Look at this refrigerator!”

So do you update it or go for the kitsch?

What year is it set?

Moore: It’s a little bit of a moving target, but it’s about 350 years in the future.

Lucas: It’s hard because when you go back and watch good sci-fi, it’s like the year 2010, and we’re in 2010, and Kevin Costner’s not walking a mule around. You have to put it far enough that people in the theater aren’t openly laughing at the concept, but it can’t be so far. Things are changing so quickly that in 300 years things will probably be pretty unrecognizable.

Is this a fast track project?

Moore: No. It all depends. We’re going to be turning in a draft maybe in three weeks, but don’t write that down, because then we’ll get calls from the executives. It all depends on how the draft is received.

Moore: In Tomorrowland his character’s name is Rip, and he plays a present-day test pilot who tests a plane and gets shot into the future. So he’s a sort of a fish out of water in the future and he is sort of figuring out how everything works. Along the way, the people in the future don’t know who he is, and they actually think he’s bad guy bent on destroying the future.

Was he always involved when you started writing?

Lucas: We actually came on with him.

Moore: When we first started loosely talking to Disney about the idea, he was not involved but they said, “Hey, we want to do a sci-fi with him and you guys are pitching a sci-fi.” They put us together so when we actually sold the pitch to them, he was attached, so it was always designed for him.

Lucas: He’s also quite literally the easiest guy to work with, the nicest guy. I think he’s been doing it so long, he’s great, so we’re lucky to have him on board.

Does he tell you the formula he wants: sci-fi, comedy, etc.?

Lucas: We had some fun dinners with him. Seeing him in public is just like, he’s, like, 9 feet tall, and his smile is incredible. He’s such a gentleman with everybody, and we talked about movies with him. He’s a savvy guy. I think he knows what he’s doing. He knows what he’s good at. He’s coming out of a world, like obviously pro wrestling is not a very constant feeder into Hollywood. Hollywood kind of looks down on it, and the fact that he’s done as much as he has is a testament to how he sort of knows what he’s doing.

While the various incarnations of the Pirates of the Caribbean attractions throughout the world mostly feature the same specific characters and scenes, Tomorrowland is full of far fewer specifics and really relies on more of an idea or feeling, with its style and look even varying from park to park. It’s much harder to predict what a Tomorrowland movie will look like, but from this interview it certainly seems like it will be unlike anything we’ve seen in the parks before.

60 classic cars and much more coming...