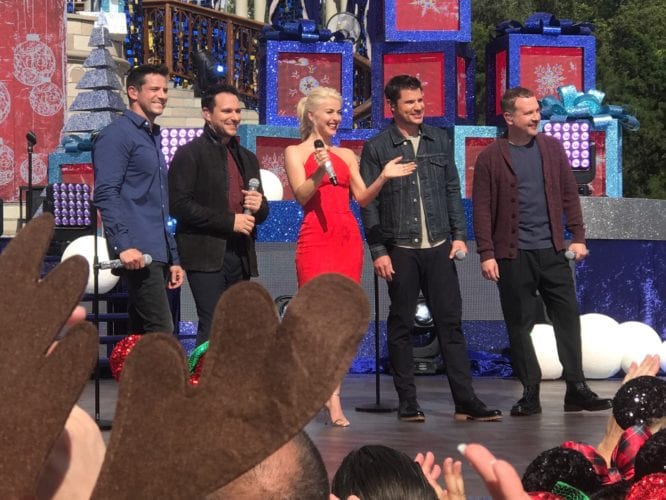 Host Julianne Hough with 98 Degrees at the taping of the 2017 Disney Parks Magical Christmas Celebration.

Disney Parks and ABC are celebrating the holidays in style this year with two holiday specials, “The Wonderful World of Disney: Magical Holiday Celebration,” and “Disney Parks Magical Christmas Celebration.”

The holiday specials will include performances by some of the most popular recording artists in the music world today, appearances by Disney characters, magical wish-come-true moments and an impossible-to-miss castle lighting ceremony featuring the Disney castles around the world.

Julianne Hough returns as host this year, and will be joined by Nick Lachey for both specials. Both hosts will perform together on the steps of Cinderella Castle at Walt Disney World on “The Wonderful World of Disney” special. Hough and Lachey will join co-host Jesse Palmer for the special, and kick off the season in a way only Disney can.

Musical performances for “The Wonderful World of Disney: Magical Holiday Celebration” include:

The second holiday special, “Disney Parks Magical Christmas Celebration,” will also be hosted by Hough and Lachey, with co-host Palmer, as they take viewers on a ride down Main Street, U.S.A. and beyond.

Musical performances for this special include:

Additional performances for this special will also be announced at a later date.

Check out our coverage from last year’s holiday special tapings below:

Join us for ‘Early Night Live’ in 360 at Magic Kingdom

Where was Derek? Why was he replaced by Nick Lachey