Against the backdrop of a world-record sculpture of canned goods at Epcot last Thursday, Disney Parks officials announced a major milestone with its Give a Day, Get a Disney Day program.

Since the program’s launch only six weeks ago, more than 600,000 people in the United States, Puerto Rico and Canada have volunteered or signed up for volunteer projects in their communities, announced Tom Staggs, the new chairman of Walt Disney Parks and Resorts. The program’s limit is one million.

“With the launch of our Give a Day, Get a Disney Day program, we hoped to spark something truly special,” Staggs said. “But even we have been overwhelmed with the response.”

In addition to celebrating the volunteer program, Disney welcomed many outstanding volunteer families from the United States, Puerto Rico and Canada who gave back to their communities in special ways. 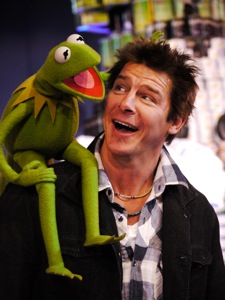 To dramatize the spirit of giving, and with the help of some Muppets, Disney characters and Ty Pennington, Disney unveiled a Guinness world record for the largest structure of canned goods. Guinness World Records authenticated the achievement – consisting of 115,527 cans – as the Largest Canned Food Structure ever created, easily eclipsing the previous record of 54,527 cans set in June 2009 in New Zealand.

The canned food sculpture was titled “Celebrate Volunteers”. Disney VoluntEARS shaped the sculpture with a larger-than-life Goofy, Mickey Mouse, Donald Duck and Pluto – all sculpted out of cans. Goofy’s trademark hat consisted of cans of bread crumbs, for instance. Mickey’s famous head was shaped from cans of black olives, and cans of sliced pineapple made up Pluto’s eyes.

The food was donated to food banks in Orlando, Miami and Atlanta later that day, after being packed up in trucks and paraded through Epcot. The CANvoy was led by Kermit The Frog and Miss Piggy.

At a dinner for media and the invited volunteer families later that night, Lovato and Jonas premiered their new song, Make A Wave. The song will be featured in the upcoming Disneynature film Oceans.

In addition to the Disney Channel stars, Orlando Attractions Magazine Kid Reporter Mindy Strater got exclusive interviews with Disney Streetmosphere characters Dean Daniels and Mary Magic Maker. Dean is a custom songwriter. Tell him a little bit about yourself, as Mindy did, and he’ll sing a song about you. Mary is the fairy godplanner of perfect vacations. 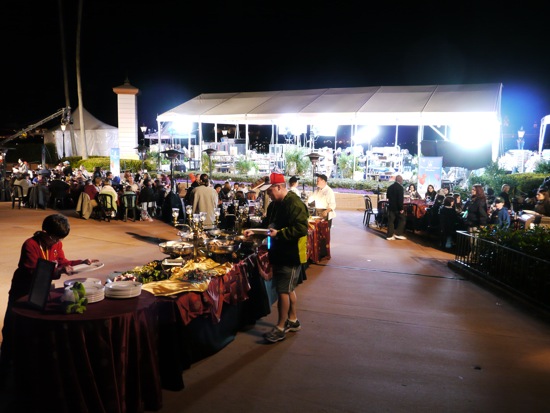 Chef Robert Irvine was running around Epcot filming an episode of Dinner: Impossible! for The Food Network. The created meal was served that night to some of the volunteer families.

Tom Bergeron and some other celebrities were also spotted in the park. It was rumored Bergeron was there to record an episode of America’s Funniest Home Videos.