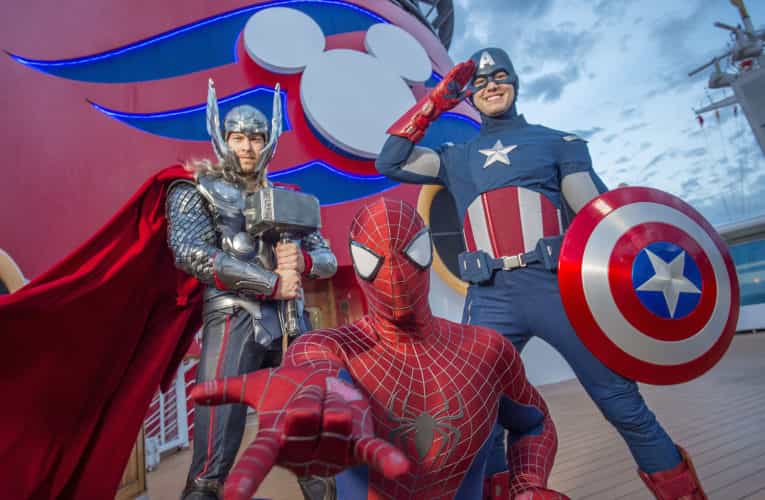 Avengers will assemble on the Disney Magic for Marvel Day at Sea in 2017.

Disney Cruise Line guests can meet Super Heroes and Super Villains from the Marvel Universe during a brand-new Marvel Day at Sea, featured on seven select sailings of the Disney Magic departing from New York City in the fall of 2017.

Occurring on one sea day during each of the seven Disney Magic sailings, the event features all-day entertainment including exclusive interactions with some of the mightiest Marvel Super Heroes and the menacing foes that oppose them, a deck party, Marvel-themed youth activities, special merchandise and unique food and beverage offerings.

Also featured are exclusive at-sea screenings of films from the Marvel Cinematic Universe including the newest theatrical releases, as well as viewings of the Disney XD shows: Marvel’s Avengers Assemble, Marvel’s Ultimate Spider-Man and Marvel’s Guardians of the Galaxy.

Highlights of Marvel Day at Sea will include:

• Spider-Man, Captain America, Thor and other Marvel Universe Super Heroes are onboard for scheduled meet-and-greets and photos.

• A brand-new party fills the upper deck with music, dancing and games.

• The deck party culminates in a stunning display of themed pyrotechnics, lighting, sound effects and the largest collection of Marvel Super Heroes and Super Villains ever assembled on a cruise ship.

• Kids and families can enjoy friendly competition during trivia games, covering heroes and fun facts from the Marvel Universe.

• For young heroes-in-training, Marvel-themed games, activities and arts and crafts will be offered throughout the day in the Marvel’s Avengers Academy in the Oceaneer Club.

To learn more about Disney Cruise Line or to book a vacation, visit disneycruise.com, and watch this video for a look around the Disney Magic: