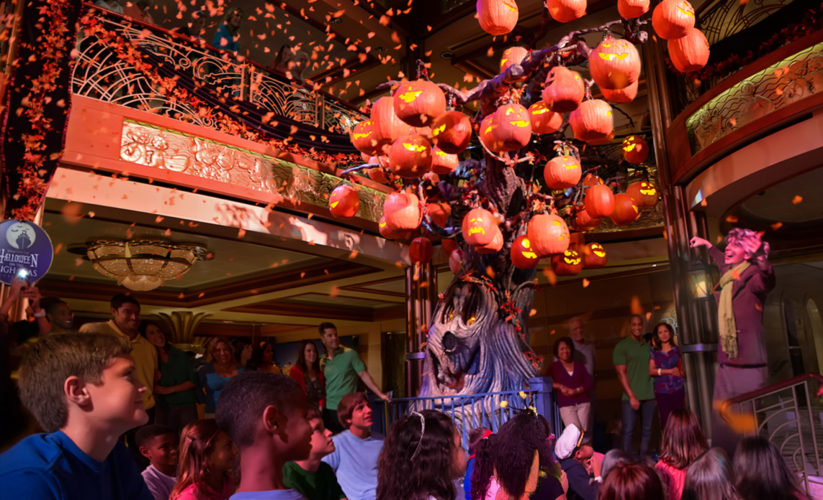 Disney Cruise Line will treat guests sailing this fall and winter with Halloween and Holiday events.

Disney Cruise Line will treat guests to Halloween on the High Seas this fall beginning Sept. 2. In 2016, Halloween on the High Seas takes place on most voyages aboard the Disney Dream, Disney Fantasy and Disney Magic from September through October. This extra-spooky celebration features Halloween-themed parties, lively entertainment and elaborate décor, including The Pumpkin Tree, which magically transforms throughout the cruise. Other special experiences include:

• A Nightmare Before Christmas—Sing and Scream: An interactive movie experience where guests are part of the action, followed by a meet-and-greet with Jack Skellington and Sally.

• Haunted Stories of the Sea: Where the bravest cruisers gather under the stars to hear some true—or not so true—tales of the sea told by a mysterious sea captain storyteller.
• Creepy Cabaret: Halloween-themed music performed live in the atrium by a band of ghostly musicians.

• Halloween Isn’t Just For Kids: For adults, the nighttime entertainment district becomes the ghoulish setting for a costume contest and a Villainous Takeover on the dance floor.

• Spooky Movies: To get guests into the spirit of the season, Halloween-themed movies will be shown on Funnel Vision by the family pool and in staterooms. 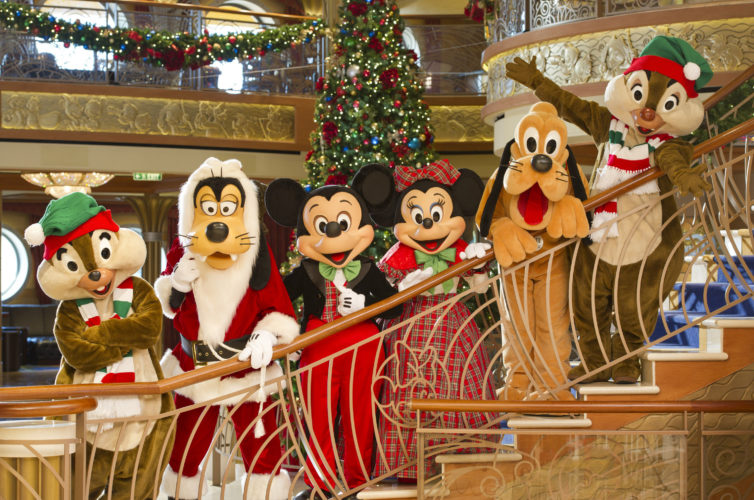 Later in the fall and winter, guests may cruise on one of the four Disney ships all decked out with holiday cheer. Starting Nov. 5, Disney Cruise Line adds sparkle to each ship during Very Merrytime Cruises. There’s “turkey day” fanfare, Christmas feasts, “snow flurries” and New Year’s Eve galas.

During these voyages through the new year, special stem-to-stern holiday events include:

• “Mickey’s Tree-Lighting Magic” in the atrium lobby on the first night of the cruise, where Disney characters lead holiday carols and the lighting of the glittering, three-deck-tall tree.

• “Santa’s Winter Wonderland Ball” in the atrium lobby, where Disney cruisers welcome the guests of honor, Santa and Mrs. Claus, with a grand celebration featuring Broadway-style entertainment, favorite Disney characters and classic holiday tunes. This evening of enchantment is made complete when a special pair of royal sisters joins the party and causes a flurry of “frozen” fun as a magical snowfall overtakes the atrium.

• Dickens-inspired carolers carrying the spirit of the holidays throughout the ship while singing holiday classics, sometimes with the help of favorite Disney friends. At the end of the cruise, children will have the opportunity to join the carolers onstage for a special farewell show.

• “Deck the Deck Holiday Party,” a tropical celebration with Disney friends leading games such as hula hooping and limbo under oversized candy canes, along with dances for the whole family like the “Yuletide Slide” and a conga line around the pool.

• A special holiday edition of the cheerful farewell celebration on the final night of the cruise, with beloved Disney characters and the ship’s crew in an engaging musical finale led by Mickey Mouse.

Christmas morning at the atrium lobby tree Santa Claus and his helpers will have a surprise for all the kids, and guests will delight in a special musical performance from the children. A traditional Christmas Dinner will be served that night in the dining rooms.

When the ships stop at Disney’s private island in the Bahamas, Castaway Cay, during the holidays, the celebration continues with “snow flurries,” a decked-out Christmas tree, Disney character meet-and-greets and holiday island music.

For an extra sprinkle of holiday joy, special amenities are available for stateroom delivery. Purchased in advance of sailing, these include holiday-themed gift packages and treat baskets and even mini Christmas trees decorated with ornaments, red berries, mini carnations and a bow topper. Plus, during the holiday cruises, the Disney Cruise Line holiday merchandise collection and ever-popular Disney Cruise Line ornaments will be available in the gift shops.

To ring in 2017, voyages during the holiday include a special New Year’s Eve party, complete with music, sparkling wine in commemorative flutes and a midnight countdown.