Disney debuts World of Color with Mickey ears that Glow with the Show, plus new Brave segment 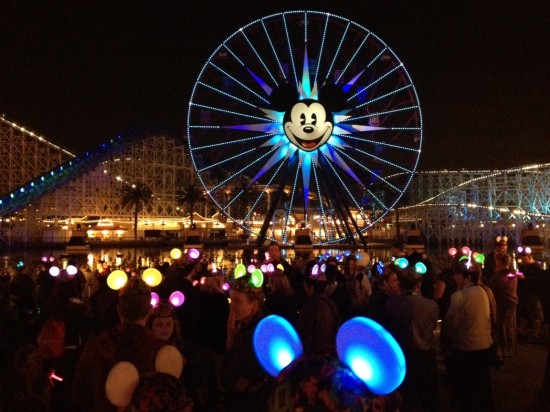 Watch as the ears change to complement and harmonize with what’s happening around the guests, allowing them to become a part of the magic. It’s said there are other surprises in store when guests visit California Adventure park with Glow with the Show ears. The hats are for sale in the park for around $25.

Check out this video of the World of Color show with the whole audience wearing Glow with the Show ear hats:

“Glow with the Show now lets our guests become part of the color of our magical ‘World of Color’ at the Paradise Bay lagoon,” said Steve Davison, Creative Entertainment Vice President of Parades & Spectaculars. “Throughout the show, the Glow with the Show Ears become a set of pixels that dance and play along with each sequence in ‘World of Color’ in a bright and dynamic way…”

There is also a new segment of the World of Color nighttime spectacular featuring the upcoming Disney-Pixar film Brave. It features an original song from the movie and the Glow with the Show ear hats also interact with this new segment.

Here’s video of the all new Brave segment in the World of Color:

There’s no word on the possibility of these ear hats coming to Walt Disney World yet. Stay tuned to Orlando Attractions Magazine for even more coverage of the grand re-opening of Disney California Adventure park.

This is really neat! It’s a great effect. I hope they keep this around﻿ for a while, since I don’t get out to California very often. It reminds of of the “Magical Moments” pins they had about 10 years ago that would light up and interact with various shows, attractions, and games. It just seems like these sorts of interactive items are only supported for a limited time (ie. Pal Mickey, Magical Moments pins).