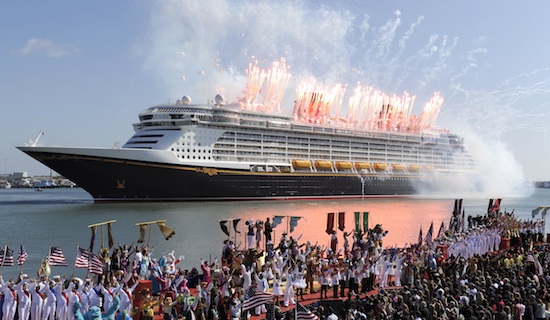 You wouldn’t expect Disney to launch their third ship with just a boring speech and a small bottle of champagne. The grandest of expectations were met last week during the christening of the Disney Dream with characters, celebrities, singers, dancers, fireworks and a 16-foot-tall champagne bottle.

A helicopter hoisted a huge bottle full of “dreams” across the bow of the ship during a christening ceremony on Jan. 19 at Port Canaveral, officially welcoming the new 4,000-passenger Disney Dream.

Academy and Grammy award winner Jennifer Hudson performed at the ceremony, along with Disney characters and dancers. Hudson is the Godmother of the Disney Dream – a fitting choice, as she got her start as a singer aboard the Disney Wonder cruise ship in 2003.

Some 3,000 people were gathered for the christening ceremony including celebrities, media and members of the public. The ceremony concluded with the bottle smash and fireworks shot from the portside ship.

Besides being a bigger version of Disney’s other two ships – Wonder and Magic – the Dream features a number of innovations including art that comes alive, a full-blown shipboard fireworks show, play floors and gigantic video game screens.

Other new features include:

• Video “portholes” that provide inside staterooms with an ocean view. The screens allow guests to see a real-time view outside the ship. High-definition cameras placed on the exterior of the ship feed live video to each Magical Porthole. As guests observe the views, they may glimpse animated characters such as the starfish from Finding Nemo, the flying balloon house from Up or even Mickey Mouse going by the “window”. 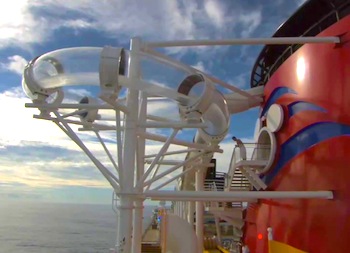 • Aquaduck is a cruise first: a shipboard water coaster featuring twists, turns, drops, uphill acceleration and river rapids. Spanning four decks in height, AquaDuck utilizes high-powered water jets that push riders upward and forward – and at one jaw-dropping point – takes guests 12 feet over the side of the ship in a translucent “swing out” loop allowing them to look down on the ocean 150 feet below.

• An updated restaurant from Disney’s other two ships, Animator’s Palate seemingly becomes immersed in an undersea environment. Crush, the surfer-dude sea turtle from Finding Nemo, makes a special appearance, swimming around the restaurant and engaging in live impromptu interactions with diners.

• In addition to the many expected children’s areas and activities, adults can escape into The District, a nighttime entertainment area with five unique venues. There’s also Senses Spa & Salon, which offers 17 private treatment rooms, spa villas and Rainforest, a special section offering steam, heat and hydrotherapy.

In 2011, the Disney Dream will sail three-, four- and five-night itineraries to the Bahamas and Disney’s private island, Castaway Cay. The Dream will be followed by a new sister-ship, Disney Fantasy, in 2012.

Take a ride on the AquaDuck water coaster:

This episode of Orlando Attractions Magazine – The Show features segments from the Disney Dream: