Disney Epic Mickey 2: The Power of Two will take gamers back to an alternate Magic Kingdom 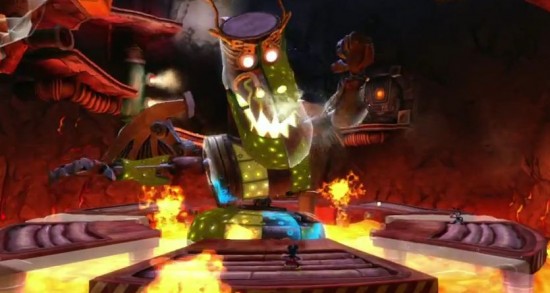 Paint and thinner will once again alter the universe on Nov. 18, 2012 as Disney Interactive launches its highly-anticipated action adventure game “Disney Epic Mickey 2: The Power of Two”.

“Disney Epic Mickey 2: The Power of Two” returns Mickey Mouse and Oswald the Lucky Rabbit to Wasteland, an alternate world filled with more than 80 years of forgotten Disney characters and theme park attractions. But for the first time, Mickey and Oswald will join forces as true partners – Mickey with the magical paint brush that allows him to wield paint and thinner, and Oswald with a powerful remote control that allows him to command electricity. This new co-op play further enhances the idea that “PlayStyle Matters” – a unique approach to gameplay pioneered by Warren Spector where players dynamically tackle different challenges in order to explore all possibilities and storylines, but with consequences for their chosen actions.

Check out the trailer for the game below:

Mickey Mouse and Oswald will join forces for the first time to overcome obstacles in a game level inspired by the classic 1937 Silly Symphonies cartoon, “The Old Mill.” Players will also engage in a heroic struggle to save Wasteland as they battle a giant animatronic blotworx dragon modeled after the Pete’s Dragon Float from The Main Street Electrical Parade, long a fan favorite at the Disney theme parks.

The Main Street Electrical Parade is not the only element from the Disney parks that will be featured in the upcoming game. Following the first game, Magic Kingdom will play a prominent role in the world of Epic Mickey.

Watch Oswald and Mickey battle the Disney parade float below:

“Disney Epic Mickey 2: The Power of Two” will be available for the Wii, Xbox 360 and the PlayStation 3. Supporting the latest technology, the game will also feature full support for the PlayStationMove motion controller. Disney Epic Mickey: Power of Illusion is currently under development for the Nintendo 3DS hand-held system. The games are currently unrated by the ESRB. For more information, visit www.disney.com/disneyepicmickey.

Below is a video featuring an interview with Walt Disney Archives Director Becky Cline and Epic Mickey 2 Creative Director Warren Spector about the history of the Oswald The Lucky Rabbit character:

Queen of the Night now in bloom at Universal CityWalk

Oswald the Lucky Rabbit stars in a new...

I didn’t really like the first one, but my kids enjoyed it. The screenshots look pretty cool though.

My boyfriend and I loved (and still play) the first Epic Mickey. I am sure I am going to buy this for him for Christmas. Graphics looks great! I wonder how it will be with the two-player element.

As Dreamers Do – The Dress Shop...