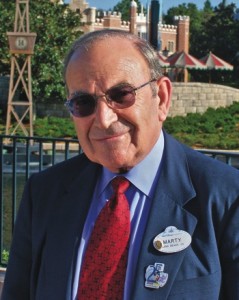 Stars in the Parks: Perry and Panettiere

He’ll be missed. Hopefully, he’ll still consult. He has truly carried on the dream.

Your story in fabulous, I meet you on the Disneyland train Christmas day, you spoke with me and my son in law….my granddaughter had the candy stripped stocking and dressed for the day. You made my day with your stories. Little did I know I was talking to a legend when you introduced yourself.
I was born 12/25/1955. Good Luck with your retirement Marty!

Does anyone have his email… i really have some questions for him, or any imagineer.