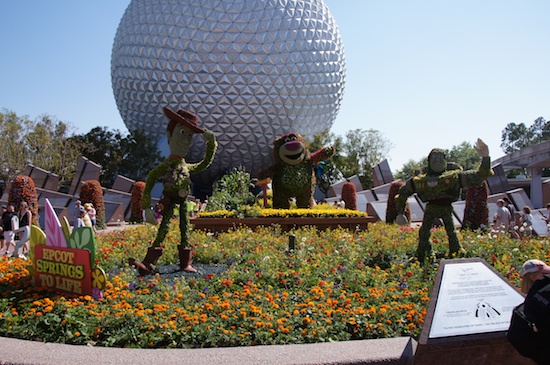 Disney has big plans for their Pixar characters the weekend of May 13 to 15, 2011. That’s the last few days of the Epcot International Flower and Garden Festival and it’s dubbed Disney-Pixar Weekend.

Although Disney hasn’t officially released much information about the event, an Attractions fan told us they’re planning on having multiple meet and greet areas with Pixar characters all around Epcot. This includes some characters never before seen at Walt Disney World. This is also the same weekend the Cars Tour 2011 will be stopping at Downtown Disney.

• Banners will be hung at the Epcot auto plaza designating it Disney-Pixar Weekend.

• The Green Army Men from Toy Story will be at the Epcot entrance handing out maps to all the character locations.

• Carl, Russell, and Dug will be appearing at the fountain stage, along with an Up inflatable house.

• Mike, Sulley, Boo, Smitty, Needleman and George from Monsters Inc. will be at the Universe of Energy.

• Mr. and Mrs. Incredible from The Incredibles will appear at Innoventions West along with Frozone. 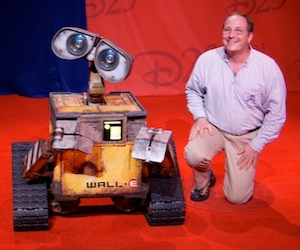 • Wall-E will be meeting guests at Mission Space.

• Lightning McQueen, Tow Mater and the Rust-eze girls from Cars 2 will be at Test Track.

• Living Coral stiltwalkers will be appearing at The Seas with Nemo and Friends.

• Flik, Atta, Gypsy and Slim from A Bug’s Life will be at Village Traders in World Showcase.

• Remy and Emile from Ratatouille will be appearing in the France Pavilion.

• Buzz, Woody, Jessie, Bullseye, Lotso and Mr. Potato Head from Toy Story 3 will be at the American Adventure.

• A theater will be set up at World Showplace with a “garden” of photo stills from the Pixar movies. Guests will be able to listen to informal discussions from Pixar and sneak peeks at Cars 2. There will also a Pixar gift shop set up with some exclusive merchandise.

• Watch for the Cars 2 logo on Spaceship Earth after Illuminations.

In addition to the weekend events at Epcot, the Cars Tour 2011 will be stopping at Downtown Disney. (Click Here to see if the tour is coming to a town near you.) At the tour stop, fans can meet Lightning McQueen, Tow Mater, Finn McMissile and Mac Truck. There is expected to be a inflatable obstacle course and a classic car show.

As always, everything is subject to change as the event draws near. But it looks like a great photo-op weekend.

UPDATE: The Disney Parks Blog just posted some information about the weekend with some changes from what we’ve posted here. Here’s what they’ve said:

“World Showplace (located between the Canada and United Kingdom pavilions), will serve as the celebration headquarters. Inside, families can enjoy meet and greets with characters from “The Incredibles,” “Toy Story 3,” “Monsters, Inc.” and “Up,” or browse a photo gallery that calls out some of Pixar’s best Easter eggs from past films. There also will be an art gallery that displays the creative work that went in to Pixar films.

Notice there’s no mention of Wall-E being there. There’s also an official site for the weekend at pixarweekend.com.

It’s actually a great and helpful piece of information. I am happy that you shared this useful information with us. Please keep us up to date like this. Thank you for sharing.

A look at the closing of Mickey’s...