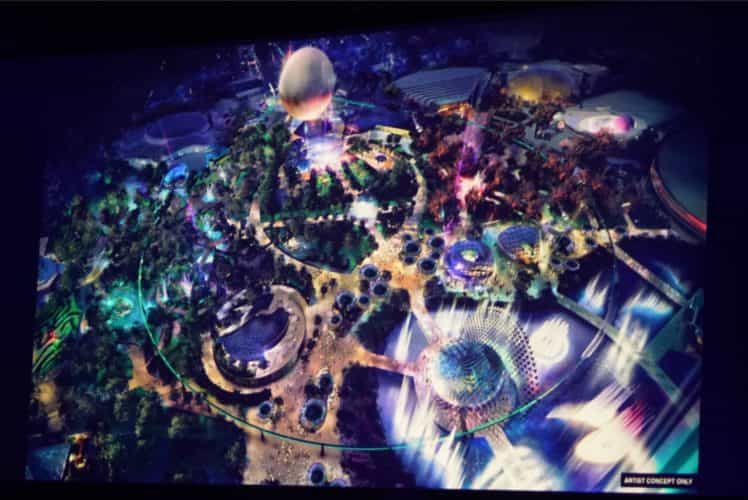 Disney has released ‘Blue Sky’ concept art at D23 Expo 2017 that gives a peek at what Epcot’s new Future World may look like after a major renovation.

Disney confirmed at D23 that several new projects are coming to Epcot in time for Walt Disney World’s 50th anniversary in 2021, including new attractions in the France and Universe of Energy pavilions, and upgrades to Mission: Space. They also unveiled plans to replace the current CircleVision 360 film in the China pavilion with a new one, to be shot using next-generation digital seamless CircleVision cameras that will eliminate the black lines between the round theater’s screens.

In addition, Disney released a ‘Blue Sky’ concept painting of Epcot’s new Future World, giving an idea of what the front part of the park may look like in several years. In the artwork, Spaceship Earth’s iconic ball is essentially unchanged, but the post-ride exhibit behind it has been downsized, and both Innoventions buildings have been removed entirely, replaced with lots of green space reminiscent of the old “Project Gemini” concept. Furthermore, the Fountain of Nations has been removed, replaced by elaborate new fountains in World Showcase lagoon.

In this Epcot concept art, the attraction buildings in Future World East (Universe of Energy, Wonders of Life, Mission: Space, Test Track) look much as they do today, but on the West side a new hedge maze-like structure and additional water features appear outside of The Land. Keep in mind that, as ‘blue sky’ concept art, it may not accurately reflect the final product.

For more about the upcoming transformation of Epcot, watch this video from D23 Expo 2017:

All you need to know about the...