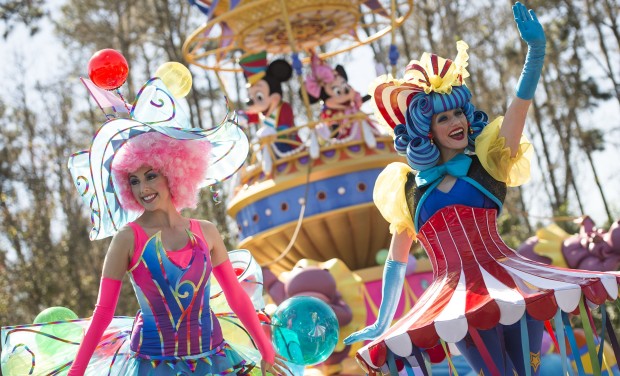 Walt Disney World has officially announced March 9, 2014 as the debut date for their all-new Disney Festival of Fantasy Parade at the Magic Kingdom.

Disney Festival of Fantasy parade is the first of a new generation of parades for Disney Parks featuring never-before-used technology on floats adorned with Disney characters from more than a dozen fairytales. Set to an all-new musical score, the parade floats will soar up to three stories tall with performers donning costumes crafted at 10 different design houses across the country.

“The parade celebrates and pays homage to what the Magic Kingdom is all about,” said Randy Wojcik, senior show director Walt Disney Parks and Resorts, Creative Entertainment. “It has the most beautiful floats, enchanting characters, vibrant costumes that come to life; and the choreography is just glorious. Yet, it is also very kinetic, relevant and powerful on a scale never seen before at Walt Disney World.”

Seven units comprised of nine floats will march down Main Street, U.S.A to the beat of an original soundtrack inspired by favorite Disney films, composed by Mark Hammond, known for his work on World of Color at Disney California Adventure and the Flights of Fantasy parade at Hong Kong Disneyland. The parade has its own voice with a theme song customized for each float followed by a medley of songs woven throughout the cavalcade.

Hear about the costumes and more in this segment from the Feb. 13, 2014 episode of Orlando Attractions Magazine – The Show.

Learn about the costumes and more for the Festival of Fantasy Parade, debuting March 9

You can see the fashion show in its entirety below:

Movie Review: ‘Planes’ is worth seeing, but...