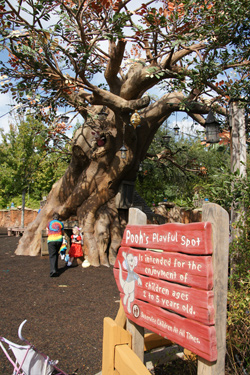 In Fantasyland at the Magic Kingdom this week, a few of Disney’s Imagineers and cast members held a test at Pooh’s Playful Spot, the playground located across from The Many Adventures of Winnie the Pooh dark ride.

Pooh characters were made available for meet and greets, but new queueing rules were attached. Parents were instructed, via cast members and signs posted around the area, to wait in line to see the characters while their children were allowed to play nearby in the playground. When the parents reached a certain point in the line close to the characters, they were asked to bring over their little ones so they could enjoy the meeting with Winnie the Pooh and his friends.

We received reports of this test being run on Monday and Wednesday, with Tuesday being a day for Disney’s staff to review how the previous day’s test went and make changes for the following. Throughout the tests, Disney has been video recording and surveying guests to get their opinion on how the queueing system worked out for them.

Improving wait times for children wanting to meet their favorite characters sounds like a great idea, but I’m guessing that this test may actually be for something greater. When Disney announced the upcoming Fantasyland expansion at the D23 Expo in September, they revealed that there would be a number of permanent princess meet-and-greet areas throughout the expansion. These will each involve an interactive/play area in addition to the actual character meeting area. In the announcement, Disney also emphasized the fact that the enhanced Dumbo attraction will feature a queue-less waiting system of some sort. The notion of magic feathers being handed out like supermarket deli tickets has been rumored.

So perhaps this week’s tests in Pooh’s playground isn’t all about trying to improve the current state of meet-and-greets but rather a way for Disney to test for the future of Fantasyland’s character meetings and attractions.

To read more about the upcoming Fantasyland expansion of the Magic Kingdom, including exclusive details about what’s to come for Pooh’s Playful Spot and The Many Adventures of Winnie the Pooh, get our Winter 2010 issue.

If they do decide to use play areas for queue assistance, I hope they reconsider their use of water features. My son got drenched in Pooh’s Playful Spot in a water feature I didn’t realize was there. I’m thinking parents will be none too thrilled if they get to the front of the Sleeping Beauty line and their child is sopping wet. Not so great for the characters either!

Disney certainly likes their water features in playgrounds, but the interactive areas planned for the princess meet-and-greets are much more than just a well-themed jungle gym. Each princess will have a unique experience that ties in with her story line. But it’s unclear at this point if those experiences will be enjoyed in a linear fashion (i.e. do something fun, then meet the character) or if it will be like the testing detailed above, where children can play while parents essentially hold their place in line.

They are also trying this experiment with Rockin’ Rollercoaster at DHS. Guest can wander around near the ride until their group is called.