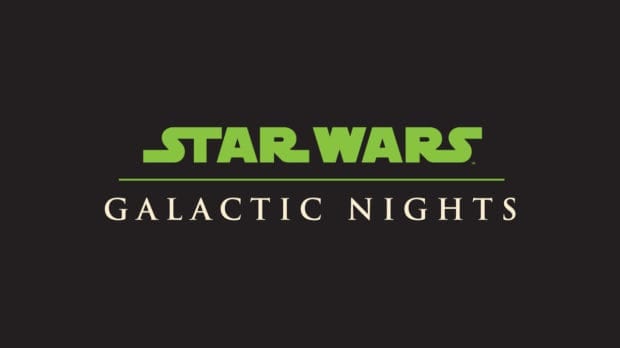 Unlike Star Wars Weekends, which was an all-day event included with park admission, Star Wars: Galactic Nights will take place from 7 p.m. until midnight on April 14 (during the time Star Wars Celebration is being held at the Orange County Convention Center) and require a special ticket.

According to the Disney Parks Blog, guests at the event will experience:

• Rebel Base Activities – The Rebel Base will serve as the event hub with multiple events, hosted shows, Star Wars dance parties and more taking place in the center of the park.

• Inside the Saga: Celebrity Chat Show – Catch a celebrity talk show in Epic Theater to learn more about the making of Star Wars films.

• Imperial March & March of the First Order – Darth Vader will lead a battalion of stormtroopers on a march down Hollywood Blvd to the Event Stage. Captain Phasma will also lead a unit of First Order stormtroopers through the park, pausing to give a demonstration of power and strength.

• Seize the Saga Interactive Scavenger Hunt – Event guests are challenged to collect Star Wars themed pieces at the photo backdrops throughout the park, revealing a surprise when all items have been collected.

Tickets are limited and cost $129 plus tax for adults and $124 plus tax for children ages 9 and under and can be bought online or by calling 407-827-7036. Disney plans to offer more Star Wars: Galactic Nights event dates in the future, though no other dates aside from April 14 have been announced at this time.

Take a look at our video of the last Star Wars event held at Hollywood Studios in celebration of the release of The Force Awakens.

‘A Christmas Carol’ in the Disney Parks ...

Watch the livestream premiere of ‘Harmonious’ at...