If you’ve ever been to Disneyland, you’ll know that special kind of magic that Walt’s first park holds in every corner and cobblestone. For one man, this was inspiration enough to recreate part of the Magic Kingdom in his basement for his three daughters. 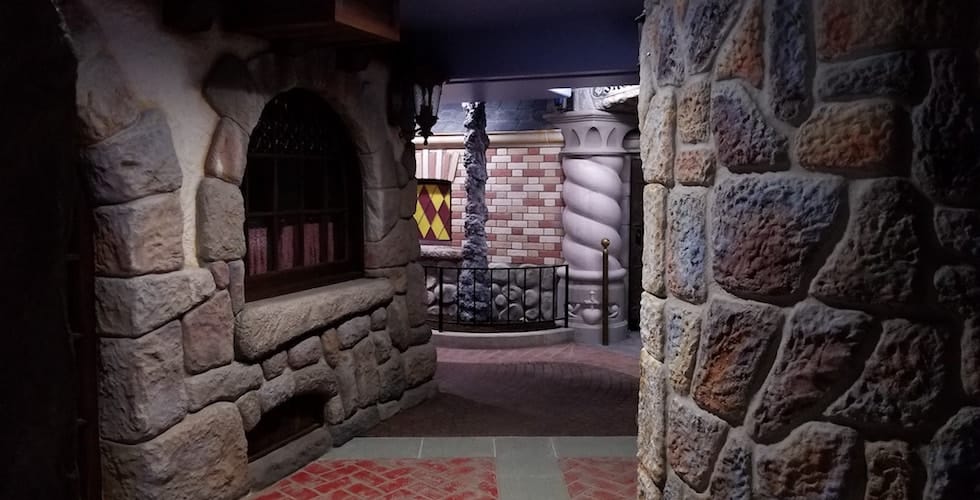 An engineer brought the magic of Disneyland to his home in Utah by replicating the park’s Fantasyland in his basement. Photos courtesy of Travis Larson.

Travis Larson, a locomotive engineer from Riverdale, Utah, set out in 2007 to build a recreation of some of Fantasyland’s most iconic structures: the exteriors for Snow White’s Scary Adventures, Mr. Toad’s Wild Ride, Peter Pan’s Flight, Pinocchio’s Daring Journey, Geppetto’s Workshop, and the Village Haus Restaurant.

“A couple of things inspired me,” said Larson. “I have three daughters and in 2003, when my oldest was 3, I made her a Disney castle bed inspired by Sleeping Beauty Castle in Disneyland Paris. I think through that process I discovered a fascination for how, as well as why, Disney designs things the way they do. There is a complexity of thought and consideration not found in most other places that encourages me to push my imagination and skill to greater degrees.”

The construction of the Disneyland-inspired space took about 11 years of on-and-off construction, with a break in 2008 due to the recession. The entire recreation was fabricated with mostly raw materials picked up from Home Depot, and nearly every element and detail was painstakingly researched and built by Larson.

A comparison of the real-life Snow White’s Scary Adventures exit, and Larson’s replica.

“By far, the most difficult [part] has been the research,” said Larson. “I have thousands of reference images that I was able to make dozens of working drawings from. The physical creation of the space was labor intensive but not necessarily difficult, more time consuming than anything.” 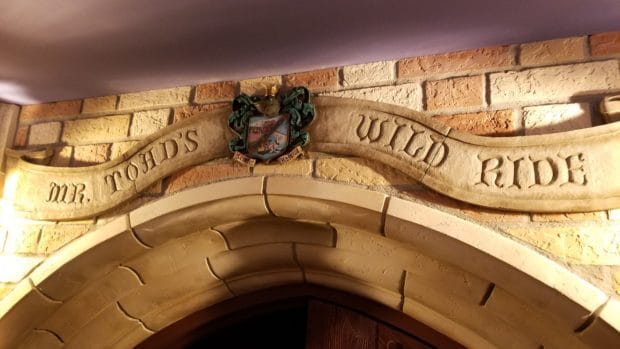 Not only does the basement feature scaled, exact replicas of the Fantasyland façades, but Larson also added daytime and nighttime lighting; crowd sounds; and even queue music from Mr. Toad’s Wild Ride, Snow White’s Scary Adventures, and the Village Haus Restaurant.

The space is still a work-in-progress, though, and Larson plans to expand upon the space’s theming rather than its size.

“There was a plan at one point to open up the fountain next to Mr. Toad’s Wild Ride, finish its bay window and the left side of the building, creating a corridor to an underground theater. It isn’t feasible, though, due to the water table here,” explained Larson. “The plans I do have are changes to the space according to season. There are plans to have it be spooky and fun for Halloween with fog and creepy sounds, autumn leaves and such for fall and Thanksgiving, as well as snow, icicles, and a snow environmental smell for Christmas.”

A look at Larson’s Fantasyland in the fall.

This is Larson’s first fully-realized themed environment, though he has created themed beds in the past for his eldest daughter and for home shows. He hopes to someday have more opportunities to fabricate themed designs on a larger scale.

“I would really love to do this type of design work professionally,” said Larson. “My hope is one day to do things that bring happiness to others, that they can enjoy. To me, the smile I see forming on a person’s face when they see my work makes the time I invest what little talent I have completely worthwhile.”

Check out the video of Larson’s Fantasyland basement below:

Disneyland in My Basement!

Celebrate the spooky season at Shanghai Disney Resort this fall

Someone has too much time and money on their hands…

Do you have any hobbies or interests, Jacob? Mr. Larson has been working on this for 11 years. What have you done with yourself in your spare time for 11 years?

It’s VERY cool. He has imagination and such creativity. What does your house look like? I’ll bet it’s normal…Bland, everyday, run of the mill BLAH!

I’d LOVE to hang out at this guys house and drink beer and talk $h!t about simpletons who probably actually believe what they are spoon fed on the evening news!!!! Haha!

With limited area, the feeling of replication does not resonate other then similar type of facade. The important thing is that it makes him happy, and nothing else really matters beyond that. It tells the story of happy memories and how we all would like to escape the real world, into our own world of fantasy and illusions. Congratulations.

The sheer dedication is impressive let alone the creative capacity and multifaceted skills it would take to build this magnificent replica!!! This would be a daunting task for a team of people let alone one person; what we are seeing is, what Walt would call, an imagineer!! I hope he is able to share more of his creative abilities with the world, God knows we could use the escape from the ‘real world’ around us.
To the people who say ”this guy has too much time on his hands”, we all have the same 24hours in a day, what we decide to do with it, makes us who we are and what we are remembered for.

Hello Travis,
This looks amazing! From an engineer to an imagineer!
Great job!

What a wonderful thing you did. As a fellow Disney Fan I congratulate you.

As Dreamers Do – Premier Episode –...