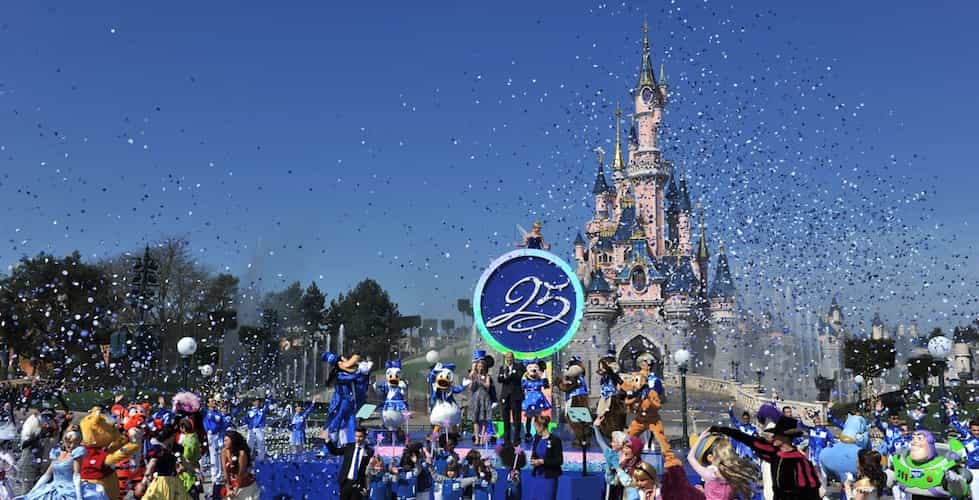 Disneyland Paris is celebrating its 25th anniversary this year, and at the kick-off event, the park debuted brand-new magical offerings to members of the international media.

“Since it opened its gates in 1992, Disneyland Paris has been a place where the young and young at heart can step into the worlds of their favorite stories, meet beloved characters, and become part of the magic in a way that only happens at a Disney Park,” said Bob Chapek, Chairman of Walt Disney Parks and Resorts. “And we’ve got even more magic in store for our 25th anniversary.”

Chapek welcomed guests to the 25th anniversary celebration with a parade of Disney characters, including Tinker Bell, who spread her pixie dust all over the crowd to mark the occaison.

Celebrity guests to the event included film and television stars, including Terri Hatcher of “Supergirl.” Another celebrity guest was John Legend, who performed a special arrangement of “Beauty and the Beast” that he created specifically for Disneyland Paris’ 25th anniversary. The night closed out with a special edition of the new Disney Illuminations fireworks spectacular.

To even further celebrate this sparkling 25th anniversary, Disneyland Paris is offering new experiences for guests to enjoy, such as:

This year is also one for giving back for Disneyland Paris. The park has launched a digital campaign with Secours populaire français and TV station TF1, called “Sparkle for All.”

Every time the hashtag for the campaign, #SparkleForAll is mentioned on Instagram, Facebook and Twitter, a €5 donation will be made to Secours populaire français, a nonprofit organization in France whose goal is to fight poverty and exclusion. The donations will be given to the association on April 12 and will allow the organization’s children to spend a magic day in the Disney Parks.

“We are proud to bring Walt’s heritage to life in the heart of Europe, to have made strong ties with Paris and France and to have made our guests dreams come true for more than a quarter of a century,” said Catherine Powell, President of Euro Disney S.A.S. “Now, more than ever before, Disneyland Paris is looking to the future, and continuing to exceed our Guests’ expectations.”

Check out our video from the kickoff celebration below.

Join us for ‘Early Night Live’ at Disney’s Magic Kingdom