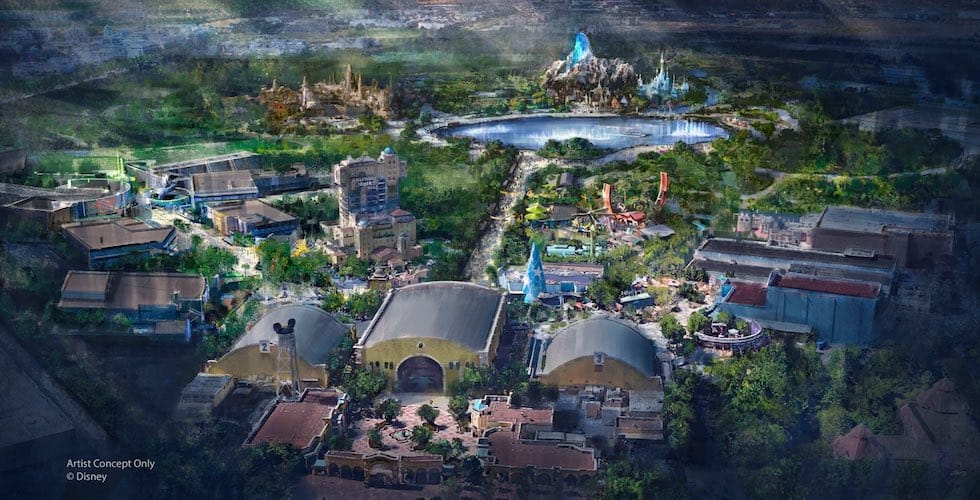 The concept art for this multi-year transformation of Walt Disney Studios Park.

This new plan will include a complete transformation of Walt Disney Studios Park, which will gain three new areas based on Frozen, Marvel and Star Wars, along with new attractions and live entertainment experiences.

A new lake will be built as the focal point for entertainment opportunities and connect each of the three new areas, making this one of the most ambitious projects for Disneyland Paris since it opened in 1992.

“We’re very excited about the future of Disneyland Paris and continue to invest in its long-term success,” said Iger. “The resort is already the leading tourist destination in Europe, and the transformative expansion we announced today will add even more of our beloved characters and unparalleled storytelling to create new lands, attractions and entertainment that further elevate the guest experience and drive new opportunities for tourism in this dynamic region.”

With more than 320 million visits since 1992, and being 6.2 percent of France’s tourism revenue, Disneyland Paris continues to be a powerful force in economic and social development with over 16,000 employees representing 100 countries. This massive investment will help make the region even more profitable and create more opportunities for European citizens in the tourism industry.

The Iron Man reimagining of the Rock ‘n’ Roller Coaster was announced at D23 Expo Japan earlier this year.

This multi-year development will be completed in phases starting in 2021. Each new area will bring some of Disney’s most popular stories to life, including the previously announced reimagining of Rock ’n’ Roller Coaster Starring Aerosmith into a hyper-kinetic, high-speed coaster featuring Iron Man, and Disney’s Hotel New York – The Art of Marvel.

Nothing has been announced to close as of yet, though the concept art released does not include the Studios Backlot Tour, or the Lights, Motors, Action! stunt show.