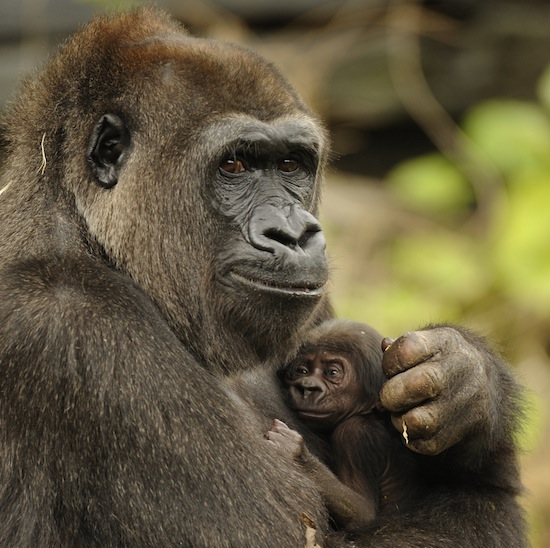 Guests at Disney’s Animal Kingdom are getting a special treat along the Pangani Forest Exploration Trail where they can get a rare glimpse of a newborn gorilla born Feb. 19. The critically endangered western lowland gorilla, whose gender is still unknown, is doing well and has already become an integral member of the gorilla family group which includes first-time mother, Kashata, father Gino, and two other females, Benga and Hope.

Members of the primate team at Disney’s Animal Kingdom are encouraged by Kashata’s natural instincts at motherhood. First-time mothers often experience difficulty knowing the right things to do. They must learn to properly hold the baby and adapt to a demanding nursing schedule.

“Kashata has been a model mother from the moment the baby was born, said Matt Hohne, animal operations director for Disney’s Animal Programs. “She immediately knew how to properly hold the baby and her nursing skills have been exemplary.”

Since Kashata has been holding the baby close to her body, animal keepers have yet to determine the baby’s gender. Most gorilla mothers keep their offspring close for several months while the baby adjusts to the environment. In addition, gorilla babies typically nurse for approximately 12 months and may be weaned between the ages of four and five.

Aside from breeding activities, Disney’s Animal Programs team remains active in gorilla conservation in other areas.
The team currently provides staff expertise for the creation of the first rescue and rehabilitation center in eastern Africa for orphaned gorillas to ultimately reintroduce them back into the wild. They have also developed an innovative training technique that enables team members to monitor the heart health of gorillas at Disney’s Animal Kingdom by administering cardiac ultrasound exams on fully alert gorillas.

• Gorillas are the largest of all primates, standing five to six feet tall and weighing up to 450 pounds.

• In the wild, western lowland gorillas are found in lowland tropical rainforests throughout western Africa.

• Gorilla habitat in Africa is quickly disappearing because of coltan mining, a mineral used to make batteries for electronics. Recycling cell phones or laptops may contribute to gorilla conservation.

What a great picture. It’s great that Disney puts such a priority and effort into keeping endangered species alive.