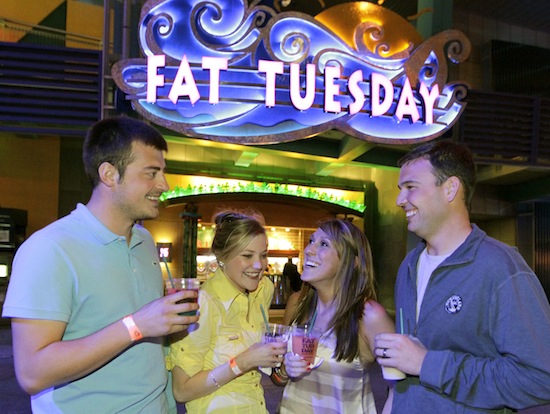 A new frozen drink fun spot, Fat Tuesday, debuts at Universal CityWalk tonight, offering guests a party atmosphere along with some of the coolest concoctions east of the Mississippi. Channeling Bourbon Street, where the original concept began more than 20 years ago, the venue will offer a wide variety of colorful frozen daiquiri drinks.

Situated on the upper level between Pat O’Brien’s and The Groove, Fat Tuesday guests can enjoy unique concoctions like the venue’s signature cocktail, the “190 Octane,” known for its orange punch, and “Peachy Senorita,” made with peach nectars and purees, as well as frozen favorites, such as creamy pina coladas and strawberry daiquiris.

This new addition began in 1984 and is a sister concept of New Orleans Original Daiquiris. Fat Tuesday’s has more than 20 locations in nine states with stores in Key West, Phoenix, Philadelphia, Las Vegas and Miami. Universal CityWalk’s location is the only one in Orlando.

I was there on opening night, and the drinks and staff are worth the stop.