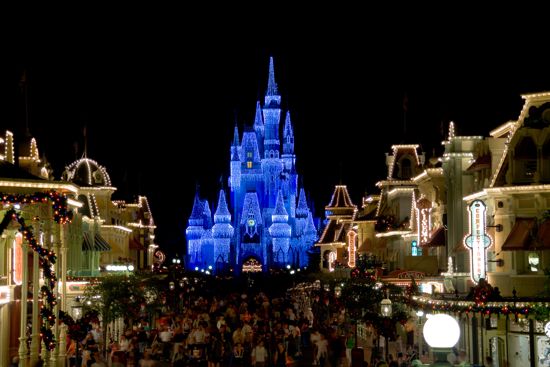 Here’s a sampling of what’s in store at the Walt Disney World Resort for the holidays.

The Osborne Family Spectacle of Dancing Lights – As “snow” falls overhead, the Streets of America backlot cityscape at Disney’s Hollywood Studios comes alive with millions of holiday lights that dance to music, animating sparkling displays to create twirling carousels, marching toy soldiers and even Santa and his reindeer taking flight. The synchronized music and light show is presented in collaboration with famed Arkansas businessman Jennings Osborne, who developed the dazzling display for his daughter more than a decade ago at his Little Rock, Ark., home. The spectacle is included with Disney’s Hollywood Studios admission. Nov. 28-Jan. 4, 2009.

Holidays Around the World / Candlelight Processional – An Epcot tradition continues with holiday customs from around the globe, international storytellers, a nightly tree-lighting ceremony featuring Disney characters, a display of snow-white and colored lights and Candlelight Processional. A beloved Disney tradition that began long before Epcot, Candlelight Processional features celebrity guest narrators accompanied by a mass choir and 50-piece orchestra for a retelling of the Christmas story. All of the Epcot holiday fun is included with regular theme park admission. Nov. 28 – Dec. 30.

Castle Dreamlights – A dazzling lighting spectacle transforms the iconic Cinderella Castle in Magic Kingdom into a glimmering, shimmering ice palace at holiday time. Bathed in more than 200,000 tiny white lights, the castle glows nightly. It’s all a fulfillment of Cinderella’s holiday wish, as guests learn during a special show that climaxes with the transformation of the famous Magic Kingdom icon.

Mickey’s Very Merry Christmas Party – On select evenings guests can experience the enchantment of Mickey’s Once Upon a Christmastime Parade and the excitement of a holiday-themed fireworks spectacular, Holiday Wishes – Celebrate the Spirit of the Season, during a special after-hours party inside the Magic Kingdom theme park. The jingle-jolly event also features live Disney character stage shows, like “Celebrate the Season,” Mickey’s “Twas the Night Before Christmas” Show and Fantasyland Pavilion Cotillion, character greetings, cookies and cocoa, and even “snow” on Main Street, U.S.A. Plus, the most-popular Magic Kingdom attractions are open to party guests. Dates are: Nov. 30; Dec. 2, 4, 5, 7, 9, 11, 12, 14, 16, 18, 19. Admission to this event requires a separate ticket.

Mickey’s Jingle Jungle Parade – A Disney’s Animal Kingdom tradition, the procession results from Mickey Mouse’s invitation to a special group of friends to join him on a holiday adventure. Mickey and his friends have added holiday accessories to their safari costumes. Nov. 28 – Jan. 4, 2009.

Festival of the Seasons – Santa Claus is coming to Downtown Disney with plenty of ho-ho-ho’s daily between noon and 10 p.m. And if Fido and Max have been good little doggies this year, they can meet old St. Nick also. Leashed pooches are welcome to pose for pictures at Santa’s Christmas Chalet located near World of Disney. Doggie comfort areas will be in the grassy area behind Once Upon a Toy and House of Blues. Now through Dec. 24.

In addition to all of these events, the ABC Walt Disney World Resort Christmas Day Parade will be taped on Dec. 6 at the Magic Kingdom.

Additional information about the holiday fun at Walt Disney World Resort is available at www.disneyworld.com/holidays

Polar Express returns to SeaWorld, plus a Shamu Christmas

Please send all info about light show — cost, schedule, etc. We are local and can attend all events if we know when they are to be held.

Close-up on the history of the Partners...