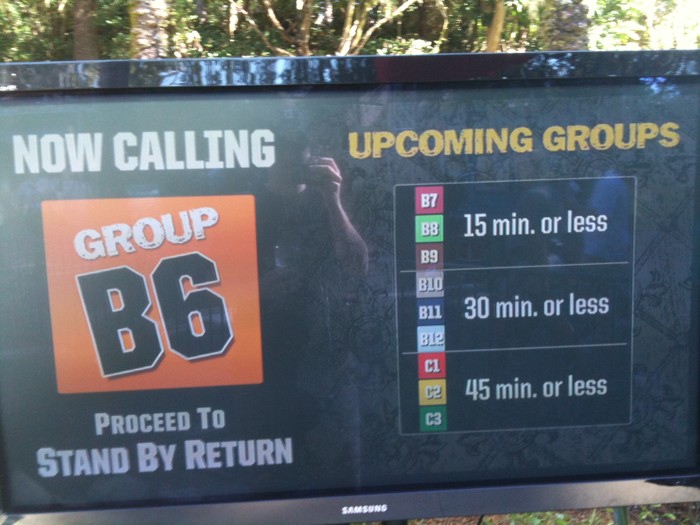 Last week, we told you about Disney testing a queueless meet-and-greet system in Fantasyland at the Magic Kingdom in which parents would wait in line while their children played in a playground until it was time for everyone to meet a character.

Now it appears that testing continues this week but on a larger scale, taking place at the Rock ‘n’ Roller Coaster attraction at Disney’s Hollywood Studios. Guests wanting to participate are given cards and invited to wait in a stand by area, rather than a stand by queue.

According to TouringPlans on Twitter, this area includes shade, a DJ, merchandise, and Guitar Hero video games and seems to be aimed at entertaining guests comfortably while they wait to ride. The comparison to how a supermarket deli works still stands, as guests are called by the letter-number combination on their cards.

Guests are not required to wait in the stand-by area but must report to the attraction within five minutes of their group being called or they will lose their chance to ride. The normal stand-by and Fastpass lines are still available during the testing. The card given to guests One of many signs posted in the area

While it wasn’t quite as obvious during the recent meet-and-greet testing, it’s fairly clear now that Disney is indeed testing the system they announced for the enhanced Dumbo ride that’s part of the upcoming Fantasyland expansion. Since the Dumbo portion of the expansion won’t be open until 2012, Disney certainly has plenty of time to decide on the details on how this system works.

I wonder if this could be combined with the old fastpass-by-text rumor so that you could be notified on your mobile when it was time to return for your group’s spot?

Why add complexity to simple things like waiting in line? This is adding tech to things that don’t need to be innovated. Fastpass was an innovation, this is a hassle.

I think this could be great. no more wasting time in line.

except for the “if you’re not here when you’re group is called you lose your place”, so instead of waiting in a queue they devised an expensive tech solution to have you sitting on a bench. Just a waste if you ask me, what’s wrong with standing in a line?

I agree that losing your place in line within a 5 minute window seems a bit too strict. But then again, if you are standing in the regular line and leave for 5 minutes, you lose your place there as well.

Also, in this test, the stand by area activities are much less interesting than what a permanent installation would bring. When this system comes to Dumbo, the interactive elements in the stand by area will (hopefully) be much more entertaining and will likely make you forget about the fact that you’re waiting for an attraction. They’ll be attractions unto themselves. That way you get to have some fun and then have even more fun riding the ride when your group is called.

@Steve B, I’m all for innovation when it comes to standing in line at Disney. WDW is one of the most popular destinations for families in the world (if not the most popular), so anything they can do to alleviate the unbearable wait times to get on the more popular rides – I’m all for it. They’re not going to make you wait on a bench (which actually isn’t that bad considering how much walking you do at Disney in a day), they’re eventually going to have entertaining, interactive things to do while you wait. Not to mention, giving you an ETA on when your group will be called, gives you time to go do other things and come back when you know it’s going to be your turn. I don’t see any problems with this.

I’d bet that this is really a test of going to a 100% FastPass like/virtual queue.

Why would Disney want to do that?

2. Combining security and park ticket into one step. If everyone has to produce a park ticket to get on every ride (the way Disney used to do it) getting into the park does not have to be as big a deal. And a 100% virtual queue will have to eventually be automated, like FastPass, or Disney will lose track of who is holding a fastpass and who is holding a ticket for standby.

3. Offering a first class experience to premium paying guests. If everyone has to step up to a machine to find their place in line, premium guest could be given a ticket in group B2 instead of C5. Or get a time window in the fastpass, instead of getting a alpha-numeric group.

The only reason why they are doing this is to keep the guest entertained. The perception of waiting in line is tedious for the average guest. While most Disney veterans wouldn’t mind waiting in line or understand that waiting in line is a part of any visit, Disney wants to try and capture their audience and give them an experience.

I love this idea. I have many, MANY times been upset with the fact that I have to use the restroom 20min into a line (I’m looking at you, Space Mountain), and either had to stand there VERY awkwardly for another 30min just to get on the ride and be running off when it’s over to a restroom, or have to leave, come back, see the line grew by another 10min, and have to wait longer/give up.

Another helpful note about this setup: if done properly, seating arrangements could be made in advance by a computer to allow for the most optimal loading of certain attractions. I take Soarin’ as a prime example: If you had a list of all the groups that wanted to board, and how large their party was, you could easily figure out what the ‘soonest flight’ they could depart on is. This prevents CMs from having to go through the line asking “PARTY OF 3? DO WE HAVE A PARTY OF 3?”, as all of the seats have been assigned. There could even be a little bar code on the ‘boarding pass’ that could be scanned at the ‘gate’ to tell the CMs where they should be seated. (This is all assuming that everyone who gets a ticket will get on the flight, which I am sure Disney could do with some good waiting area entertainment.)

There certainly is room for improvement for this system though:

– There is nothing preventing guests from running from attraction A to B to C, then back to A, ride, B, ride, C, ride. Not to mention that if you used this with a Fastpass, you would be able to wait in line for many, MANY, rides at a time. With no penalties for missing your ride time (i.e. must wait another xx min. before getting a new pass), this could easily be manipulated into a system of strategy, timing, and luck. (Honestly, I would prefer this as I would enjoy gaming the system, but I do find it unfair for those who just want to wait.)

– If you lose your ticket, you are now out of line. This is the same as for Fastpass, but since this is designed as a replacement for standby, this should not be a possibility (you’ve never heard “Oh shoot, I lost where I was standing!” in standby)!

The majority of these could easily be fixed by having this all be cell phone based. Be it text, bluetooth, or specialty app, it would be very easy to just have your phone stand in line for you.

I missed the part where they estimate how long your wait will be. If that’s the case, then it’s not so bad, still adding tech to places that I don’t really think need it, but if instead of me waiting through a queue I’m buying an Itzakadoozie, or a Mickey Shirt, they’ll say it was a success and I’m down with that.

I don’t mind queueing within reason. We have had some great conversations with people, and swopped tips. It makes the time pass more quickly. It is more difficult with small children though, when they get bored and irritable.

does anyone know how long this new queue system will be around for? sorry..this question has probably been answered, just i didn’t look through the comments

Transformers getting ready to ‘roll out’ in...