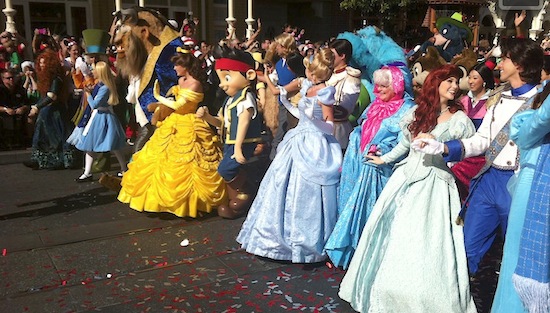 The award-winning television spectacular will also feature special appearances by Sarah Hyland, Nolan Gould and Aubrey Emmons-Anderson from ABC’s comedy Modern Family, actor Patrick Warburton, Olympic Gold Medal-winning gymnast Gabrielle Douglas, and the popular pint-sized duo from daytime TV, Sophia Grace & Rosie. Travel expert and television personality Samantha Brown will be checking in throughout the program, filling families in on the fun they can experience at Disney Parks in the upcoming year. Brown also will share other ways to vacation with Disney, including Aulani – A Disney Resort & Spa in Hawaii, Adventures by Disney and Disney Cruise Line.

The parade will also feature Disney friends and holiday characters spread joy and good tidings through Disneyland Park in California and the Magic Kingdom park in Florida with fanciful floats and colorful cavalcades. Some of the floats and Disney friends in this year’s festivities include: Princess Merida, making her holiday parade debut with a troupe of dancers, bagpipers and drummers; Popular gadget-building brothers from the Disney XD animated series, Phineas & Ferb, dancing down the parade route to greet their fans (sharp-eyed viewers also might spot the mysterious Agent P lurking about); Star Wars villain Darth Vader and his legion of loyal Stormtroopers land in the Disney Parks galaxy with a “Force”-ful parade march; and direct from Disney Junior, Sofia the First will be making her parks debut in a royal, horse-drawn carriage.

Tune-in times are as follows, on the ABC Television Network (check local listings):

Viewers can visit the official site by clicking here for updates on the show and join the social media conversation before and during the telecast with the hashtag #DisneyParade.

Check out our photo gallery from the parade filming at Magic Kingdom and Disneyland:

Hello, what are the prices to go see the parade in the magic kingdom in orlando, florida? and who will be hosting that parade?

Check out these sweet treats at Walt...