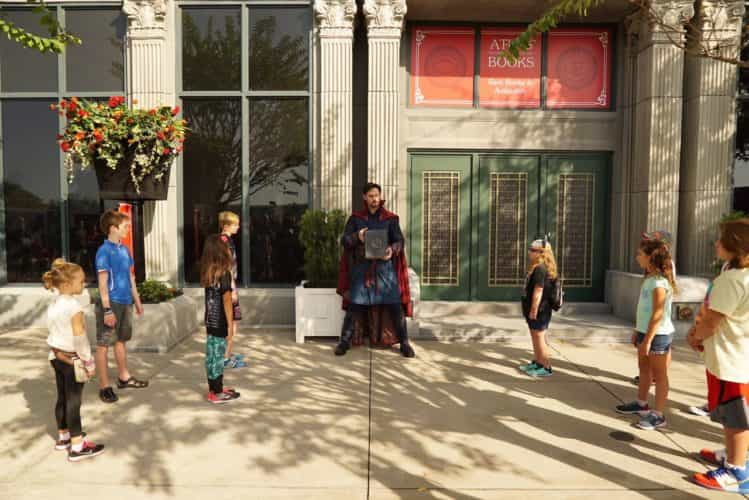 The mystical manipulator of the multiverse is now featured in a new live character experience currently occurring along Pixar Place in Disney’s Hollywood Studios, not far from the Toy Story Midway Mania attraction. Strange does not appear for a traditional character meet and greet. Instead, he leads an interactive class in the style of the Jedi Training Academy, where selected children may learn some Agamotto-inspired illusions, just as Strange was instructed by the Ancient One.

During the Dr. Strange character experience, aspiring young sorcerers are shown how to activate their “third eye” and unleash their “alternate spiritual self” through meditation, spell recitation, and mystical hand gestures. The presentation is enhanced by some simple sound and visual effects (such as fog), and concludes with Dr. Strange posing for photos with with his youthful students. 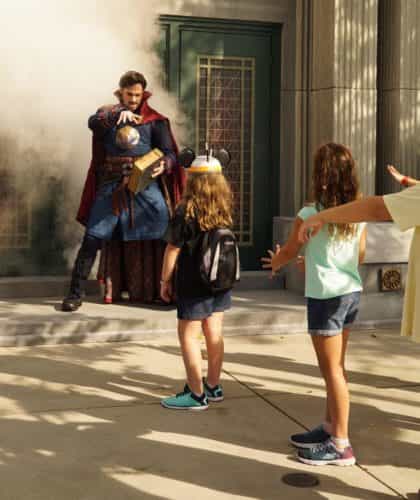 Adults are invited to play along with the training from the sidelines, but are not permitted to join the photo op afterwards. Showtimes for new Dr. Strange encounter are not currently listed in Disney’s published times guide, but should appear starting next week. The experience is available five days a week for the next four weeks; exact days and times may vary.

Note that, due to licensing restrictions imposed by the contract with Universal Orlando’s Islands of Adventure, Disney may not advertise Dr. Strange using the Marvel brand name. However, sharp-eyed comics fans will notice some newly installed props in the area referencing Marvel Universe icons such as The Daily Bugle.

Enjoy this video from the debut day of Dr. Strange’s appearances at Disney’s Hollywood Studios:

Mmmm. If I’d been there, my reaction would have gone beyond “flirting” into the realm of “coming on.”

I wonder if the good Doctor will show up on my coast–if not at a Disney park, then at Universal Islands of Adventure?

Behind-the-scenes at 'Back To Neverland' with Walter...