Out of the Loop: DreamVision announces plans for theme parks in Texas and Alabama 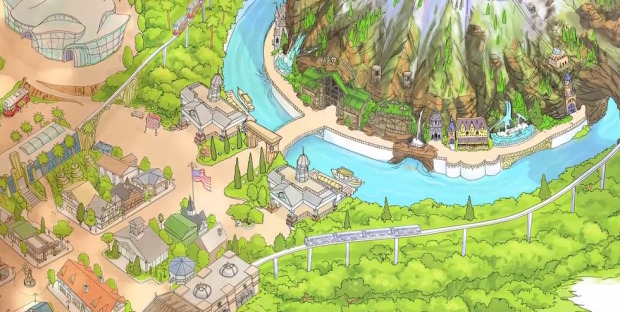 The DreamVision Company recently revealed plans for two multi-billion dollar theme parks. One in Texas and one in Alabama.

Located in Fort Worth’s Metroplex region and slated to open in 2020, DreamVision Mountain/DreamScape, Texas hopes to transport guests through multiple themed lands and attractions. Rising up in the center of the park will be the iconic DreamVision Mountain, a towering winter wonderland and one of the largest indoor winter snow experiences in the world, featuring winter sports like skiing, snowboarding and bobsledding. The realistic winter landscape, inspired by the artwork of Thomas Kinkade, will be created by technology developed by Malcolm Clulow, the foremost expert in indoor snowmaking. Themed lands, including Dreamscape Tinsel Town, Nadia’s Storybook Land and Dreamscape Metropolis, will surround DreamVision Mountain, each offering unique attractions, rides and adventures.

With an eye on celebrating the musical heritage of Muscle Shoals, DreamVision Soundscape plans to be a music-inspired theme park/resort destination slated for completion in 2019. Anchored by the iconic DreamVision Music Mountain, DreamVision Soundscape will feature musically themed “neighborhoods” showcasing country, pop, gospel, jazz and more with unique all-age rides, such as Soundscape Singing River; “Breaches,” an extreme roller coaster; “Slide Guitar,” a drop ride; and “Oceanica,” a domed water playground along with various performance venues. The destination will also include golf courses, hotels, retail and more.

According to DreamVision CEO Rick Silanskas, the company has already begun pre-development on the parks. “Although they are being built simultaneously, each has separate themes, rides and attractions that embody the DreamVision family brand,” he said.

Since 2002, Silanskas, a producer, musician and composer, who has created award winning work for the motion picture, television and animation industries, has assembled a team of top entertainment industry professionals, among them chief creative officer Ron Logan, previously executive vice president and executive producer for Walt Disney Entertainment and the force behind the Broadway production of “Beauty and the Beast,” and president Vince Silanskas, a former Walt Disney World executive.

Rick Silanskas said the parks are being developed in partnership with Bryan Robinson, CEO, Provident Global Capital. “We are very excited about our partnership with DreamVision and their team of proven industry leaders. Even more compelling is how DreamVision aligns with Provident Global Capital’s core values and our mission of investing in companies that have a positive impact on society,” said Robinson.

“We are thrilled to have Dave take charge of the theme park division,” Silanskas said. “With his expertise, DreamVision has the best team to launch these two family-oriented theme parks. Both parks will include golf courses, water parks, hotels, concert venues, retail and more.”

Read more about DreamVision Mountain and the individuals behind it in our Fall 2014 issue of “Orlando Attractions Magazine”.

Out of the Loop: Universal Studios Hollywood celebrates its 50th anniversary

Non-Disney music that makes us think of...