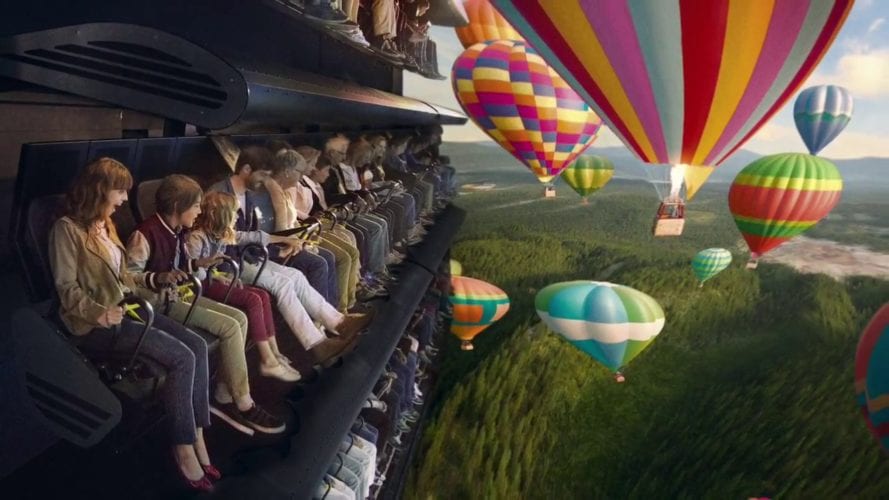 The attraction is called The Extraordinary Journey and is billed as “the world’s most technically advanced ride of its kind.”

“The Extraordinary Journey is a spectacular adventure,” explains Guy Nelson, Dynamic Attractions President. “Futuroscope guests will experience the sights, sounds, and motions of this attraction’s compelling story, which takes them to locations many have only dreamed about.”

“Dynamic Attractions never stopped advancing the technology, making this attraction do things that will make guests come back to ride it again and again,” states Dominique Hummel, Futuroscope President.

The Extraordinary Journey is a Dynamic Flying Theatre, a media-based attraction that uses sophisticated technology to ‘immerse’ theme park guests into exciting stories. The attraction’s screen is 20 metres in diameter (65.6 feet), a far wider arc than the famous semi-circular ceiling in the Arc de Triomphe.

Dynamic Attractions is comprised of 400 engineers, designers, fabricators and theme artists based in Orlando, Vancouver, Toronto, Arlington (Texas), Dongguan and Shanghai. It has built 50 iconic attractions for Disney, Universal Studios and other major theme parks.

Watch this video for a preview of Dynamic’s new flying theatre ride system: