Eight things you should know before riding Guardians of the Galaxy: Mission Breakout 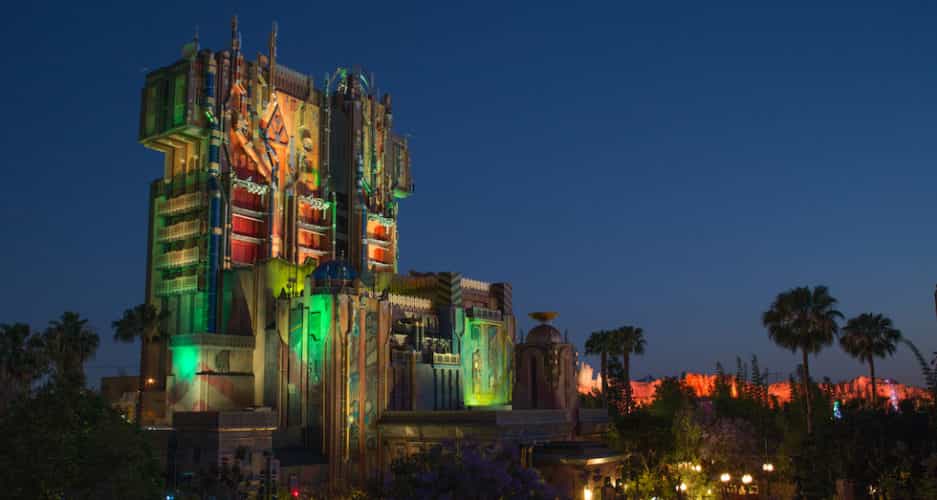 As the hype (and even anti-hype) about Guardians of the Galaxy: Mission Breakout reaches an all-time high opening weekend at Disney California Adventure, here are a few things you should know before riding it. There are some minor spoilers ahead, so if you want to go in blind, stop here.

It’s Way More Intense than Tower of Terror
Yes, it’s still a drop ride and uses the same ride system as the ride it replaced (The Twilight Zone Tower of Terror), but not nearly in the same sense as it used to. Your gantry lift is in constant (and pretty wild) motion. Even when you “stop” for the video segments in the ride, you are still bouncing. The ups/downs are erratic, quick and unpredictable. And since you don’t stop for longer narrated parts like before, they last a lot longer. If you ever got motion sickness on Tower, you will definitely feel it on Mission Breakout … twice as much.

It’s Less Scary
Despite the fact the ride is so much more intense, it’s considerably less scary. The story helps with the light-heartedness overall, but the music and comedy really make this ride entertaining and more family friendly. Unlike Tower of Terror, you don’t get the fear factors such as tension building up to the drop or the scary story about people who died in a hotel. Instead you’re on a journey with likeable characters you’re “helping out” set to some rad tunes. After seeing tons of families experience it, kids were coming off laughing and clapping rather than crying and clinging to a loved one’s arm.

Not all Six Sequences are Entirely Unique
There are six different sequences you can experience during Mission Breakout. The set-list includes:
• “Hit Me With Your Best Shot” by Pat Benatar (1980)
• “Give Up The Funk” by Parliament (1975)
• “Born To Be Wild” by Steppenwolf (1968)
• “I Want You Back” by The Jackson 5 (1969)
• “Free Ride” by The Edgar Winter Group (1973)
• “Burning Love” by Elvis Presley (1972)
During each ride, you will see a total of three scenes starring the original cast. If you’re assuming each song would have its own unique video sequence, you may be bummed to find out that’s not the case. I personally got to ride sequences with the first four songs above and did have a few repeat scenes, but sometimes the order was different. The third scene where you say goodbye was always the same as it’s tied into specific ride movements.

Cast Members are Still in Character
A pretty common thread among us fans who were sad to see The Twilight Zone go was the loss of the cast member role as a part of haunting narrative. Monotones and dead eyes added a lot of the entire experience of Tower of Terror by bringing an added element of suspense and unease. However, I was pleasantly surprised to see the cast members at Mission Breakout following suit and being an active part of the attraction’s story. Much like in Tower of Terror, each cast member we encountered approached it in different way, but all coming from the same backstory. Even the safety spiel is still tied into the ride just as before. 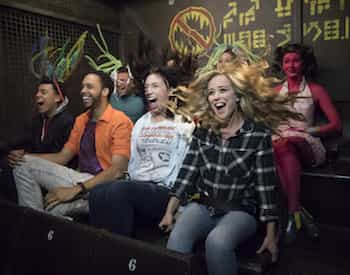 Guests freefall aboard a gantry lift in Guardians of the Galaxy – Mission: Breakout. Photo by Scott Brinegar/Disneyland Resort.

The Amount of People in your Elevator will Greatly Impact your Ride Experience
I was fortunate to attend the press event for the grand opening of this ride, which meant I got to ride it a lot, which resulted in a lot of differing lift capacities. The first few times we rode, it was only us with a few other people, which allowed us to hear all the on-board audio clearly. However, when we rode with more and more people, the screaming/laughing/cheering really made a difference in what we could hear. The music is plenty loud, but when you’re in a full elevator, it’s much harder to hear Rocket’s quips and the characters lines get a little muffled. It’s super exciting to ride with a ton of pumped up people, but you’re trading that in for missing some funny moments from Rocket. Pro Tip: The sound is noticeably better/louder if you are seated in row one or six.

Pay Attention to the Preshow
Like Tower of Terror, Mission Breakout features a preshow that is imperative to understanding the narrative of the ride. There is even an added preshow in the lobby that expands on the story via a massive video screen. Both do an amazing job at setting up the “VIP Tour” you are about to go on. Together, they seamlessly make the ride feel like it was made for the attraction more than laid over a preexisting ride system. I will note the lobby video is a lot of fun and hardcore fans really should watch all of it if they can, but you won’t be lost on the story if you enter Tivan’s office before you see the whole loop. The office is where the main set-up happens.

Easter Eggs are Everywhere
If you know anything about the Marvel Cinematic Universe and Disney Imagineering, then Easter eggs shouldn’t be a surprise to you. What “is” pretty insane is there are reportedly more than 2,200 Easter eggs throughout the attraction. It can be pretty overwhelming when you first walk in the lobby, and the number easily quadruples when you enter Tivan’s office. It will be impossible to digest them all on your first ride through and trying to look for all the hidden goodies at once can really interrupt your first experience. Luckily, you can spot a few pretty easily without it being a huge distraction – namely the previous version of Harold the Yeti from the Matterhorn Bobsleds ride is on obvious display.

It Really is as Good as Tower – Just Different
As we say goodbye to an iconic attraction in the West coast park, we welcome a truly worthy successor. Both Tower of Terror and Mission Breakout are without a doubt amazing attractions offering incredible and thought out storylines, impeccable theming, and E-ticket thrills. One is a suspenseful mystery that leaves you reeling when you finally reach that drop after an exploration of the unknown. The other is an adventurous, toe-tapping romp where you save some heroes of the galaxy and have a laugh doing it. It’s possible to love both attractions equally, or to prefer one to the other – either way Mission Breakout ticks off all the same boxes that made Tower such a fan-favorite.

Here are a few videos from the new attraction:

Tips to maximize your time at Disneyland’s pricey...

Disney provided them to us.

If I take the chicken exit, how much will I get to see of the pre-show experience?

All of it. The chicken out door is right next to the Gantry Lifts.

I was skeptical but found guardians to be a superior ride experience to Tower of Terror. It was a lot of fun and makes TOT seem boring by comparison. I hope Orlando updates TOT to Guardians.

I went on Guardians for the first time a few months ago and was terrified. I had my eyes closed and was clinging to my boyfriend for dear life as he and his daughter had their hands in the air. I’m 24 and have always felt uneasy about drop rides. How can I conquer this?

I used to be terrified of drop towers in general and was especially terrified with the TOT. My first time going on Guardians, I almost threw up and I hated it. I found out eventually that I had a lot more fun if I tried to smile, forgot about my fears, and until you get used to it, hold onto the bars really tight. The holding onto the bar’s part works the best. It keeps you so you’re not as afraid of falling and it’s not as stomach jerking.

Also going on it multiple times in one day also helps.

I did this ride the other day and it was terrifying.I have a phobia of scary rides but decided to go for it. I am am glad I faced my fear but I was shaking and in tears when I got off.

I hate the outdoor rides like this but was 76 the last time I rode the galaxy ride. inside safe relax and enjoy,….. However i rode with my friends husband as my friend said she cries when she rides it so she did not go on it at all.
I suggest you go more than one time, like get back in line and ride it again…. and maybe even again another time that day. because each time you go the ride seems tamer… thinking this is my most favorite ride at Disneyland!

Kelly go on the ride several times…. go again a second time right away.,…. then go again later in the day. each time you go the ride is more familiar and the fear subsides.

This ride was wild. I am scared of drops and this was extremely intense for me. My body did not feel prepared for the intensity of the falls. It was seriously scary.