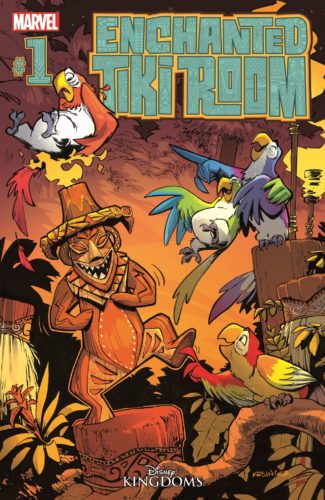 The birds will sing words and the flowers will bloom in a whole new medium when Marvel Entertainment’s Disney Kingdoms series publishes a new Enchanted Tiki Room comic book this coming October.

Marvel Entertainment and the minds at Walt Disney Imagineering announced today the first issue of the Enchanted Tiki Room comic book, the newest Disney Kingdoms limited series coming this October. Creators Jon Adams and Horacio Domingues are taking readers on a tropical Disney Kingdoms vacation to the Enchanted Tiki Room, a place of legend,fantasy, and mystery. Here, on an isolated and mysterious island, almost anything can happen. Inside the island’s Enchanted Tiki Room – an astonishing cast of birds, plants and ancient Tiki gods spring to life. As the next boat arrives carrying new visitors, what stories will unfold, what mysteries will be revealed and how are they all connected?

Enchanted Tiki Room #1 is written by Jon Adams, with art by Horacio Domingues and cover by Brian Kesinger. Three variant covers will also be available, including Orange Bird and connecting covers by Jason Grandt, and an action figure variant by John Tyler Christopher.

“The Disney Kingdoms series gave us an opportunity to build on stories from our classic Disney Parks attractions that guests love,” says Walt Disney Imagineer Tom Morris, speaking with the Disney Parks Blog. “We’re hoping the books inspire readers to revisit favorite attractions with a new perspective. For this series, we’re taking guests to a tropical island filled with everything loved from the original attraction and introducing some new characters, songs, and stories to discover.”

Launching under the Disney Kingdoms banner, Enchanted Tiki Room has been created in close partnership with the designers, producers and creative directors at Walt Disney Imagineering. Joining other critically-acclaimed titles like The Haunted Mansion, Figment, Big Thunder Mountain Railroad and more – Disney Kingdoms titles present new adventures that expand upon the lands, attractions and characters of Walt Disney Parks and Resorts.

To find a comic shop near you, visit www.comicshoplocator.com or call 1-888-comicbook. Until October, you can get in the Tiki mood with our video of the attraction at the Magic Kingdom: