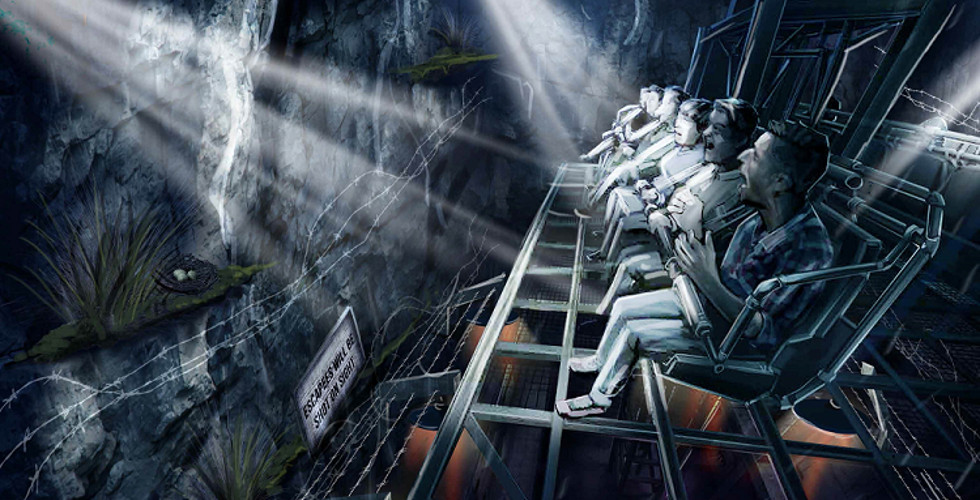 Escape Alcatraz features new sets, script, characters and costumes that culminates in a drop ride simulating a jump from the infamous island prison into the frigid and choppy waters of the San Francisco Bay.

Construction of the new drop ride and permanent attraction is currently underway below sea level. The Dungeon must first break down several walls in order to accommodate the new ride within its existing 25,000 square feet of underground space, then build new rooms, staging, and sets around it. Engineered by Swiss-based WillTEC, the custom-built ride height totals 23 feet with a drop of just over 11 feet. The ride will hold a total of 18 passengers per drop, with a ride time of approximately 33 seconds, while a lap bar provides passenger safety in two gondolas, each holding nine passengers at a time.

Over $2M was spent to build the new “Escape Alcatraz” drop ride and show, which will be unveiled to the public over Halloween weekend. Elaborate sets with simulated grass and foliage create an authentic re-creation of an Alcatraz cliff complete with barbed wire on aged wooden supports, sooty brickwork, and splashes of mud. Sounds of distant thunder, sea gulls, sea lions, crashing waves, and the hum of the prison echoes around a room filled with the smell of briny sea air.

As visitors depart the “Ghosts of Alcatraz” scene they’re marched through a dimly lit corridor into a stark and foreboding and immersive processing room. Realistic prison set pieces and props, including posters of prisoners and the prison’s rules, surround them as they’re fingerprinted and processed as prison inmates by a grim and not-so-friendly guard. As is true with all Dungeon shows, visitors will also learn a bit of true history surrounding 1915 Alcatraz and its infamous past.

Next, prisoners are shuffled out to the desolate prison yard where they find themselves joining an escape attempt as a storm rages above. Cue the sirens, barking dogs, shouting guards, and the scream of bullets flying past. Searchlights sweep across the faces of trapped prisoners who, desperate to escape The Rock, now face a jump into the deathly San Francisco Bay. Lucky prisoners successfully “Escape Alcatraz” and complete their journey through The San Francisco Dungeon with the option of taking home a souvenir photo of their faces on the drop ride experience upon exiting through the gift shop.

The San Francisco Dungeon’s new “Escape Alcatraz” drop ride and show will open on Halloween Weekend, Friday, October 28. Shows will run continuously, 365 days a year. The San Francisco Dungeon admission starts at $22 for adults, with lower rates for SF Bay Area residents, youth, seniors, students, teachers and the disabled. For pricing, visit thedungeons.com/sanfrancisco, and watch this video for a behind-the-scenes preview of the new attraction:

Tickets to ‘The Price is Right Live’ at Dr. Phillps Center on sale tomorrow