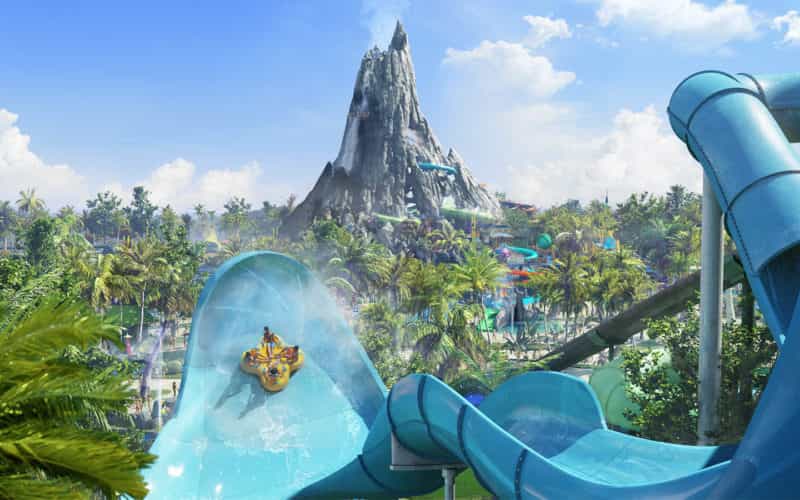 Universal Orlando’s first “water theme park” opens in just under two months, and today we can finally bring you all the details you need to know about Volcano Bay tickets and pricing.

Single Park/Single Day admission to Universal’s Volcano Bay
If you just want to spend a single day only at Volcano Bay, your ticket will cost $67 plus tax for adults, and $62 for children ages 3-9. (For comparison, tickets to Disney’s Typhoon Lagoon or Blizzard Beach are $62 for adults, $56 for kids). Unlike Universal’s other two theme parks, there is no pricing difference between “Value” and “Anytime” days on Volcano Bay’s operating calendar.

Universal Orlando 3-Park Tickets
3-Park tickets offer guest admission to Universal Studios Florida, Universal’s Islands of Adventure, and Universal’s Volcano Bay Water Theme Park. Options available from 1 to 5 days in duration, and all tickets expire 7 days after their first use. A 3-park/1-day “anytime” ticket costs $219 plus tax for adults, $214 plus tax for kids 3-9; that’s a $40 premium over the 2-park/1-day ticket without Volcano Bay. (Single day tickets valid only on “value” days are $14 cheaper). 3-park multi-day tickets are also available: 3 days including Volcano Bay is $314.99 for adults ($304.99 for kids), and each additional day costs $10 more.

Universal Orlando 3-Park Annual Passes
You can now purchase a Universal Orlando 3-Park Annual Pass that includes admission to Universal Studios Florida, Universal’s Islands of Adventure AND Universal’s Volcano Bay Water Theme Park. Four different pass options are available, and a FlexPay option is also available with interest-free monthly payment rates after one initial down payment. Note that current annual passes do NOT automatically include access to Volcano Bay, and that all 3-Park annual passes EXCEPT Premier are blocked out from visiting Volcano Bay during July 1-31, 2017.

Universal’s Volcano Bay Express Pass
Volcano Bay will be the first water park to rely on Virtual Lines, which will use the TapuTapu wristbands to alert you when it’s your turn on the rides. But with an optional Universal Express pass, guests can bypass the Virtual Line experience and ride Volcano Bay’s rides at their convenience. Volcano Bay Universal Express pass prices vary by the date, and can be purchased for one use per ride ($24.99 to $49.99 per person per day, plus tax), or as Universal Express Unlimited ($49.99 to $79.99 per person per day, plus tax). Note that Volcano Bay Express access is NOT included after 4 p.m. with Premier Annual Passes, NOR is it included with overnight stays at the Portofino Bay, Hard Rock, and Royal Pacific hotels. Also, Express is not accepted at the headliner Krakatau Aqua Coaster attraction.

Pricing information on additional Volcano Bay upgrades, such as Cabanas and Premium Seating, will be available soon. Learn more about Volcano Bay ahead of its grand opening on May 25 at this website, and watch our construction videos for further updates:

Join us for ‘Early Night Live’ at Disney’s Magic Kingdom

Mickey and his pals are ready to welcome...

Are you sure about the Express passes at Hard Rock and Royal Pacific. The official website does not list Volcano Bay as express pass perks for those 2 hotels but DOES for Portofino!

When you stay at select Loews Royal Pacific Resort, you’ll receive a free* Universal Express Unlimited™ pass to skip the regular lines at participating rides and attractions in Universal Studios Florida™ and Universal’s Islands of Adventure™. That’s a value of up to $89 per person, per day^. Valid theme park admission required.

But Portofinos Benefit page states;
When you stay at select Preferred and Premier on-site hotels, you’ll get a free* Universal Express Unlimited™ pass to skip the regular lines at participating rides and attractions in Universal Studios Florida™, Universal’s Islands of Adventure™ and Universal’s Volcano Bay (opening early summer 2017). That’s a value of up to $89^ per person, per day. Valid theme park admission required.

Good eye! I contacted the head of Universal PR, and he confirmed that the website is in error. Express for is not included in any hotel at this time. I asked for further clarification on PBH, will let you know if I hear more.

Breaking down parking options and prices at...