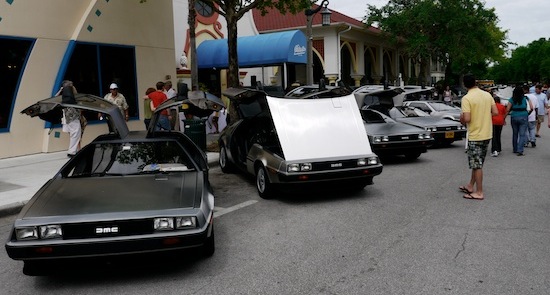 The 8th Annual Celebration Exotic Car Festival, benefitting children’s charities, will be held April 9 and 10, 2011. This four-day event, hosted by the Ferrari Club of America, will be bigger and better than ever, with new activities and even more unique, exotic and race cars – as well as famous and movie and television cars to be displayed in Celebration, Fla.

The weekend will start on Thursday, April 7 with the Sebring Track Days, when many of the cars will be stretching their legs for two days at the Sebring International Raceway. More than 100 exotic cars and race cars will be running at full speed. Each afternoon will feature an FCRA vintage Ferrari Challenge Race, with owner-drivers of Ferrari Challenge race cars competing for individual and team trophies.

The festivities continue with a Friday Fireworks dinner on April 8. The American Adventure Pavilion at Epcot will host this exclusive dinner, followed by dessert on a private terrace for viewing of the Illuminations show. Tickets are $85 in advance.

The Concours of Exotic Cars will take place on Saturday, April 9, with 250 exotic cars, race cars and Hollywood movie cars lined up along Downtown Celebration’s lakefront promenade. Cars from Ferrari, Maserati, Lamborghini, Bugatti, McLaren, Lotus, Saleen, Spyker, Pantera, Aston Martin, Bentley, DeLorean and many others will be displayed. Admission is free for spectators.

Special features at this year’s event will include a showing of some of the most famous television and motion picture cars in history, including the original Lamborghini Countach driven by Adrienne Barbeau in the 1981 film “Cannonball Run” and the Lamborghini Diablo from the Jim Carrey film “Dumb and Dumber.” The famous “Back to the Future” DeLorean, a huge crowd pleaser in 2010, will return again and be available for photo opportunities. The Star Wars landspeeder and the Speed Racer Mach V will also return, and will be joined by the Flintstones car from the John Goodman film, and the Rolls Royce from the Dudley Moore classic “Arthur.”

Saturday evening will be the annual Jetport Food and Wine Party. A private jet hangar at Signature Aviation at Kissimmee Airport will be converted into a chic, South Beach inspired nightclub for one of the most incredible parties of the year. Bocuse d’Or USA Foundation (considered to be the elite international society for chefs) and Les Chefs de France have assembled some of the world’s most renowned chefs to prepare a culinary extravaganza, accompanied by unlimited champagne, fine wines and spirits.

Chefs Thomas Keller (The French Laundry, Napa and Per Se, NYC) and Daniel Boulud (Daniel, NYC) will be making a rare appearance and will be preparing their most famous dishes at the event. Chefs Keller and Boulud will be joined by more than 20 other celebrity and local chefs, as well as numerous wineries and martini bars. The evening will feature live entertainment, an exclusive fashion show, an air show, performance artists, charity auctions, and more. More than 100 exotic cars, business jets, vintage planes and personal aircraft will also be on display.

The Jetport Food & Wine Festival attracts guests from all over the country, and in 2010 was attended by numerous Hollywood actors including Carl Weathers, Christopher MvcDonald, Lea Thompson, Cory Feldman and Stephen and Daniel Baldwin. More celebrities are expected in 2011. Tickets for this star studded, must-attend event are available for $150.

The event keeps going on Sunday, April 10, with the annual Exotic Car Road Rally. Departing Celebration morning under police escort, more than 100 exotic cars will compete in this fun and competitive rally, which will conclude with an exclusive beach barbecue within Disney World. Tickets for this event are $75 per person.

The festival, which is organized by a small team of dedicated volunteers of Celebration and other local residents, has established itself as one of the largest of its kind in the country. Since its inception in 2004, more than $600,000 has been donated to Make-a-Wish and Special Olympics Florida through the efforts of this event.