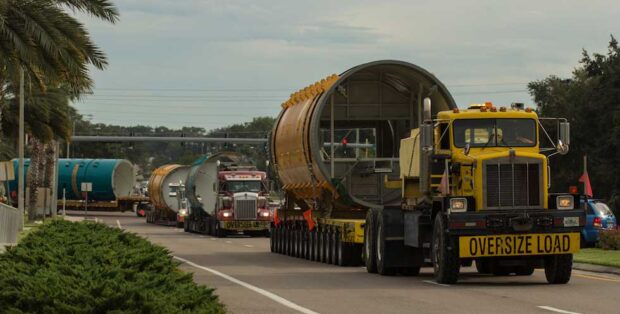 It must have been a sight to see. Huge colorful pipes rolling down the highway. But this wasn’t really a pipe. It was the sections of Falcon’s Fury, the first drop tower of its kind in the world, coming to Busch Gardens Tampa next spring.

Construction has been underway since the ride was announced in June, and now Busch Gardens design and engineering team is almost ready to start putting the pieces together.

While smaller components of the 335-foot drop tower have been arriving from several countries in Europe, including Slovakia, Switzerland and Germany, the cylinder sections arrived last week. The vertical tower is comprised of nine sections, each up to 20 feet in diameter and weighing up to 95 tons, or 190,000 pounds.

The total weight of the tower pieces that were delivered last week was approximately 519 tons, or more than one million pounds of steel. The pieces were shipped more than 4,700 nautical miles from the port of Tarragona, Spain and made the month-long trip across the Atlantic Ocean to the Port of Tampa. The ride pieces were then trucked to Busch Gardens over the course of two days, where they are waiting to be installed later this year.

Falcon’s Fury will stand at 335 feet and will pivot riders face down before dropping them down 60 mph. Located in the Timbuktu area, Falcon’s Fury will be visible from any location in the park and even across the Tampa Bay area.

Here’s a look at the pieces being transported to Busch Gardens:

Here’s the full announcement of the ride from last June: