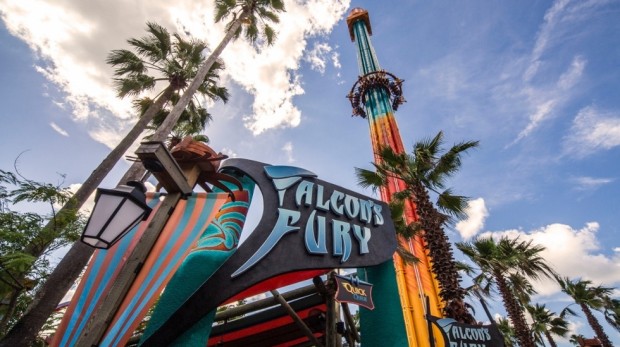 The ride has been in a “soft open” phase for weeks, but today, Sept. 2, 2014, marks its first official day open in the land of Pantopia. It was originally supposed to open this past spring, but there was a delay of some key parts.

“We know guests from around the world have been waiting to experience this one-of-a-kind thrill ride, and we are excited to officially invite those guests to ride Falcon’s Fury,” said Park President Jim Dean.

Falcon’s Fury stands at 335 feet and takes riders soaring 60 mph straight down. At the ride’s highest point, Busch Gardens has added an element of surprise; like its bird of prey namesake, riders pivot 90 degrees in midair to a face-down dive position. An instant later, riders plunge with speed and power that they’ve never experienced before.

To get a sense of what it looks like to drop face-down from 335 feet in the air, take a look at this video done during testing for the ride:

See the initial announcement of Falcon’s Fury in this video from June 2013:

For more updates about Falcon’s Fury and Pantopia, visit FalconsFury.com.