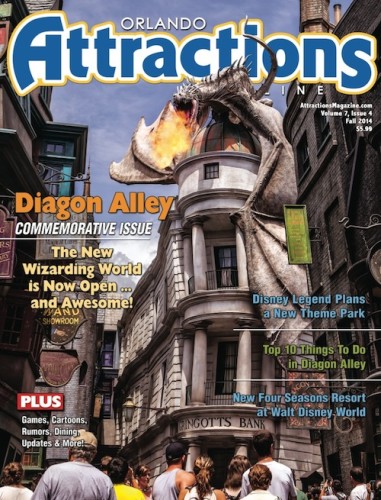 The Fall 2014 issue of Orlando Attractions Magazine is now available in print, on the Nook and in our iPhone and iPad apps.

The Wizarding World of Harry Potter: Diagon Alley is now open, and awesome! We have devoted more than 25 pages to it with photos, details, dining, rides, shopping, tributes and touring tips.

But that’s not all that’s in the issue. We’ll also tell you about a brand new theme park in the planning stages. It’s being developed by some very creative people, including a Disney Legend.

You also won’t want to miss our usual features, updates, rumors and other columns with the latest theme park and tourist attraction news out of Florida and beyond …

Plus:
• Feedback – Theme park fans share their photos and opinions!
• Vacation Planner – Calendar of Orlando-area events.
• Work In Progress – Information & photos from what’s in the works.
• Versus – We put attractions head-to-head.
• Photo Finds – Photo spread featuring Orlando’s latest and greatest.
• Bemusement Park – Our original comic & games.
• Rumor Queue – What’s next in Orlando?
• Out of the Loop – Find out what’s happening in theme parks outside of Orlando.

The current issue and all back issues are also available in our iPhone and iPad app. Click Here to download the free app.

You can also find the latest issue at Theme Park Connection in Orlando, Fla. Print subscribers should receive their copy between now and Oct. 11, 2014.