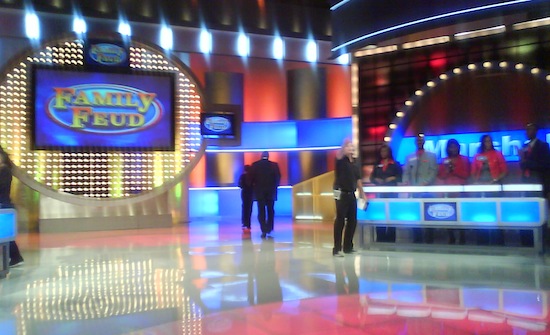 There have been many television shows and even a few other TV game shows taped at Universal Orlando but arguably nothing with such a rich history as one of my favorite game shows of all time – Family Feud. I got the chance to experience the very first taping of the new season at the show’s new home this past Saturday and I had the best time a game show fan could ask for. They usually do multiple shows each day they’re recording and it’s completely free to attend. If you’re in Universal Studios, just grab a ticket for your desired time at the audience center just inside the main gate. If you’d like to attend the tapings without visiting the park, just follow the signs towards the Blue Man theater. It could take a while from the time you line up until you get seated inside the sound stage, so go to the restroom before getting in line. Plus once you get inside, it’s a two hour commitment with no restroom breaks.

But don’t let those two hours turn you away because once things get going, time flies. While you’re in line, monitors are set up showing classic Feud moments and the history of the show. This serves as a great reminder to fans and a good introduction to the series for newcomers. Then once you’re inside and seated, a warm-up guy gets you pumped with music and trivia.

Before you know it, the feuding families are on stage and you’re clapping along to that famous theme song and laughing with the new host, Steve Harvey. Steve gives the show something all his own, not often found in other hosts. Steve, as he told us, is a straight shooter, so when someone gives a bad answer, expect him to give them a look that could kill and comments such as, “Your probably wrong so I’m heading over to the other family already”. During breaks when he wasn’t being touched up, he would come forward to the crowd and talk about the questions and what answers surprised him and what answers the families should have known.

Since it was the very first taping, my experience took a bit of extra time for set up, but I wouldn’t have changed anything. It’s priceless to see a show being recorded live and seeing the bloopers you know will be edited out because something didn’t work or when a question has to be thrown out because neither family chose a top answer during the face off. Steve did his best to hold it together and laugh it off with us.

One last word: Even though everyone is invited to attend, I do agree with the signs that say you should be at least 14 years old due to the nature of some of the questions and the interesting answers that come up. But if you’re in the area on select weekends from now until mid-September, stop by Universal to have a amazing time seeing a true classic. Check your local listings and get ready to watch the Feud on TV with new host Steve Harvey starting Sept. 13, 2010.

If you have any questions about the show or tapings feel free to ask below and I will answer as best I can.

Watch out for wizards – Harry Potter conference this weekend at Universal

Family Feud was a great show to see live Steve Harvey was a great host! I can’t wait to see it once more I am defiantly going to attend a few more tapings!!

Can you please let me know when the first 2 shows of the day that were recorded on 7/16/10 are going to be aired? I want to know because I was in the audience.

Did people have big poster boards (signs) in the audience supporting the family they were there supporting ex: GO PARKERS!!!

Ive got tons of pictures if you need them!

My husband and I were in the audience on Sept 10th for the 4:00 show. Could you please let me know when it will be televised. I really want to see the show on TV.

I Am New To This State And I Wanted To Know When Would The Show Start Taping Again.My Fiance And I Would Love To Be There When They Start Taping Again We Are Real Big Fans Of Steve Harvey As Well As Family. Fued

im from charlotte nc and i rush home to look
@ the family feud i love it i want to b on this show to meet steve harvey he is so funny and the best host that they could’ve found. best wishes to the show its the best.