With the announcement of a July opening for the rest of Storybook Circus and a “in time for the holiday season” opening of the remaining expansion (besides the Seven Dwarfs Mine Train coaster in 2014), construction is in full swing. Above is a view of the second spinner for Dumbo The Flying Elephant which recently had all of the arms installed on the base. 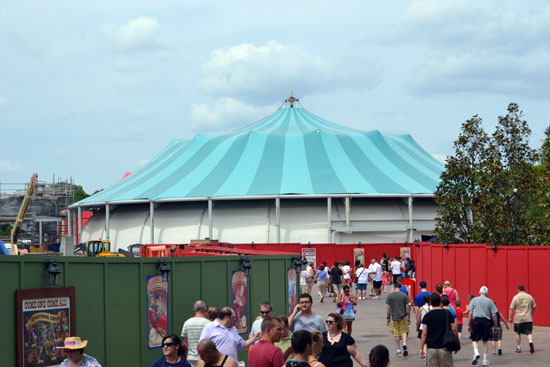 The larger tent in Storybook Circus received its colored outer tent which meshes in well with the smaller one. 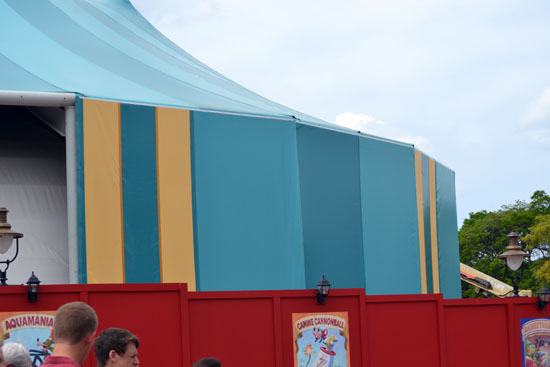 The bottom layer of the outer covering has also started to be installed. The larger tent will be home to Big Top Souvenirs, a retail store.

Casey Jr. Roundhouse water play area is being installed and can be seen from Storybook Circus peeking over the walls.

The water play area will open in July and feature Casey Jr. and a bunch of animals on the way to the circus.

The rock-work surrounding the facade is getting more and more details, including this whimsical seashell.

It’s getting harder to see the rolling hills and rocks with all the construction on the Seven Dwarfs Mine Train. It is said that Belle’s Village and the Little Mermaid area won’t be visible from the current Fantasyland once the expansion is complete.

The arch between the Little Mermaid area and Storybook Circus is almost complete.

Bonjour Gifts in Belle’s Village has received a lot of attention lately.

The facade for Gaston’s Tavern looks like it is near completion and seems like it is straight from the village scene in the movie.

A beautiful weather vane has been installed at Belle’s Cottage.

The second section of the castle wall’s infrastructure is now up. 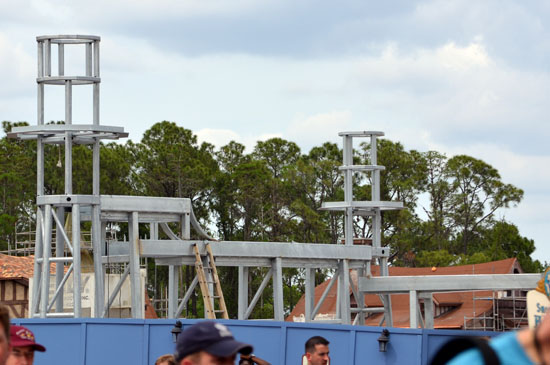 Seven Dwarf’s Mine Train ride is coming along well. The brown steel are supports for the ride track and the gray steel is for the building and mountain theming around it.

Construction on the new restrooms and rumored Tangled themed area is coming along well and gives you a rare view of the Haunted Mansion from Fantasyland. 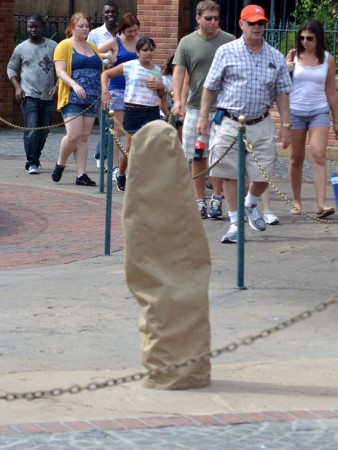 Special scanners for the RFID Fastpass testing are now in place at many of the attractions in Magic Kingdom. Click here to read more about this new Fastpass system.

Remember, The Beauty and the Beast and Little Mermaid themed areas are set to open this holiday season with the other half of Storybook Circus in July, and Seven Dwarf’s Mine Train set to open by, or in early 2014. Click here to check out our coverage of the What’s New, What’s Next presentation on New Fantasyland that took place last week.

Here’s our Imagineer-led tour of the Storybook Circus area and the Fantasyland construction:

Be sure to stay tuned to Orlando Attractions Magazine for even more new Fantasyland construction updates and news.