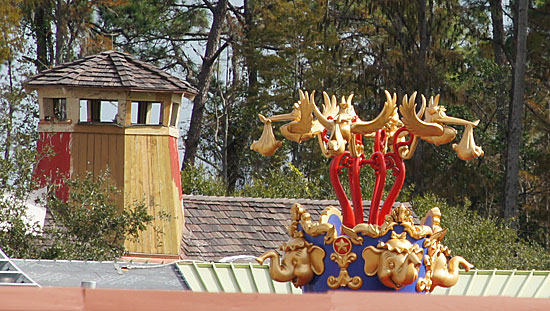 The tall center of one of the two new Dumbo spinning rides is now visible over the construction wall of Storybook Circus, in the Magic Kingdom’s Fantasyland expansion.

Beautiful elements of the Dumbo story can be seen. The stork is delivering Dumbo, and Mrs. Jumbo looks proudly upon Dumbo’s flight.

Note also some paint tests in progress on the Barnstormer roller coaster loading station in the background. 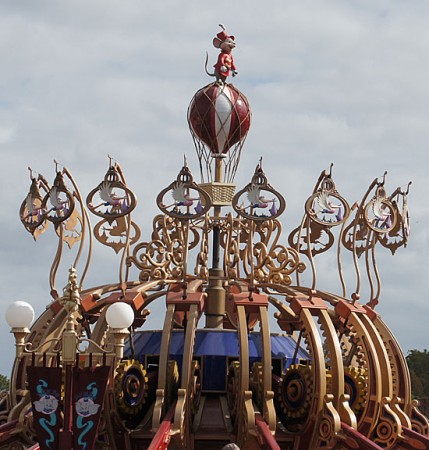 This is the tall center of the current Dumbo. The stork is also seen delivering Dumbo, but here Timothy Mouse encourages Dumbo’s flight.

Here’s the Dumbo area, as seen today. The show building of the queue portion of the new Dumbo attraction was painted yellow a few weeks ago. Note the brown steel rising at center. 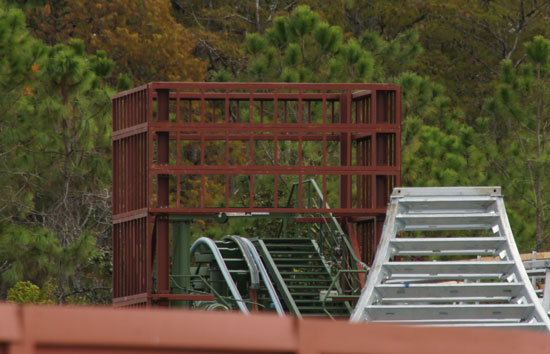 The brown steel seems to be structure for theming of the big first drop. The Barnstormer is being rethemed to The Great Goofini. 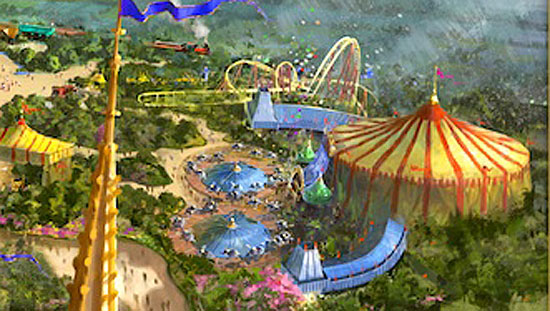 This is what the area looks like in the artist rendition of the overall Fantasyland expansion. 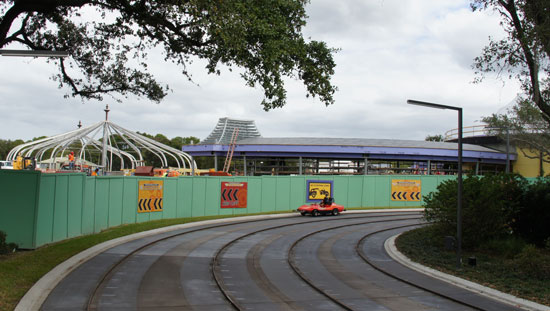 The Storybook Circus area, as seen today, overlooking the Tomorrowland Speedway from the Tea Cups area. 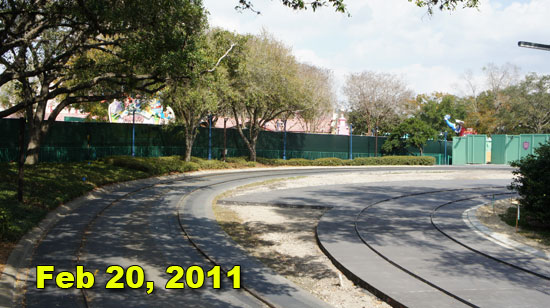 Just several months ago, this curve of the Speedway was being reconfigured — the curve was tightened, all four tracks shifted in about 15 feet — to allow for more room in Storybook Circus. Notice the trees to the left at the fence. 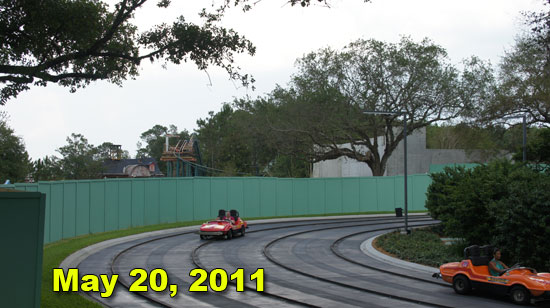 A few months later, the trees were gone. 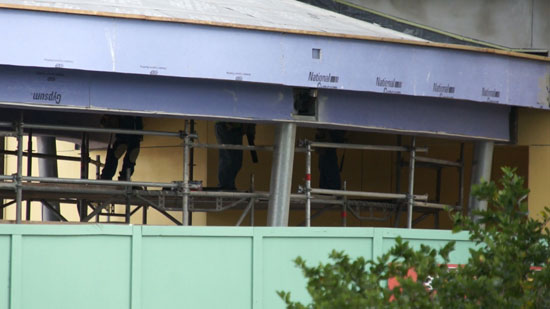 Today, workers were preparing the ceiling of one of the walkways for the Dumbo queue show building. 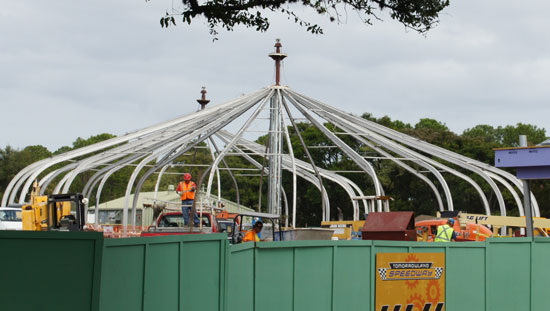 The original tents are still down to their structures. These tents were built in the 1980s, when this area opened as Mickey’s Birthdayland. 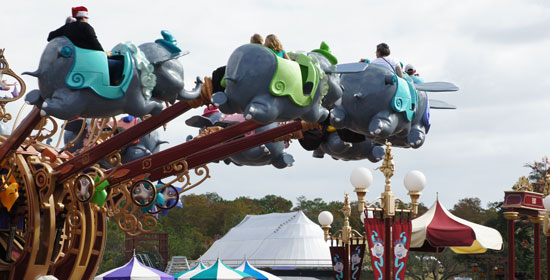 Dumbo keeps a watchful on Storybook Circus. In several weeks, he’ll fly there! 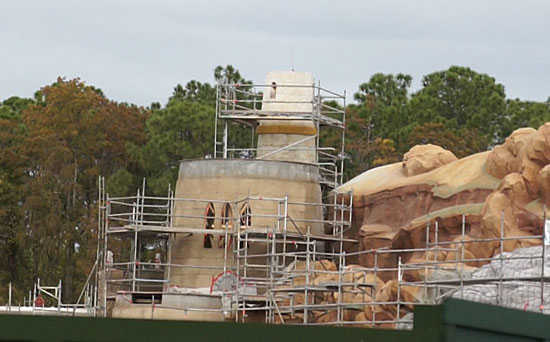 Theming as of today of Prince Eric’s castle at the Voyage of the Little Mermaid attraction.

Work on the rock at the foot of the Beast’s castle continues.

Work on a new roof line started a few weeks ago. The arrow points to the new roof. 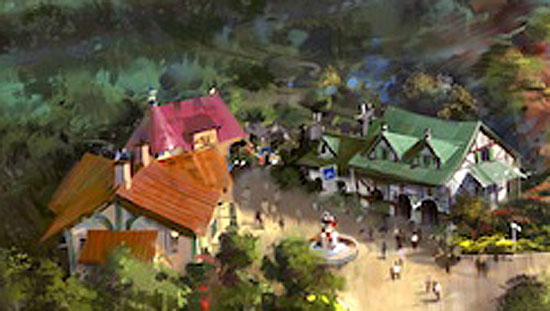 The new roof may be for the building with the pink roof in the Fantasyland expansion artist rendition. 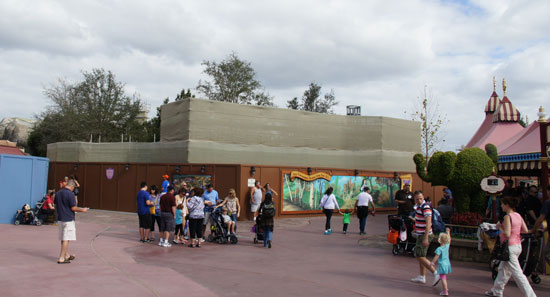 Work on a castle wall near Belle’s father’s house (Maurice’s house) continues. Note the abundance of trees.  The tall portion peeking over the fence at right is the structure for a turret.

Note: Just below the pink concrete walkway here is a section of the Magic Kingdom utilidor. The utilidor is the park’s basement. One “floor” below this concrete is where cast members enter after taking a shuttle from their parking lot.  You can see the utilidor in some tours offered by Disney. 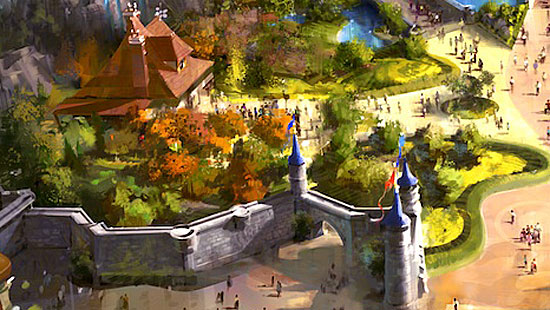 Compare this area to the artist rendition. It seems like an archway will be built, and twin turrets will rise where Dumbo currently spins.

It’s the carousel’s turn for refurbishment. 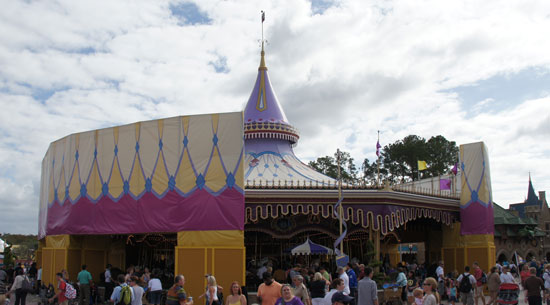 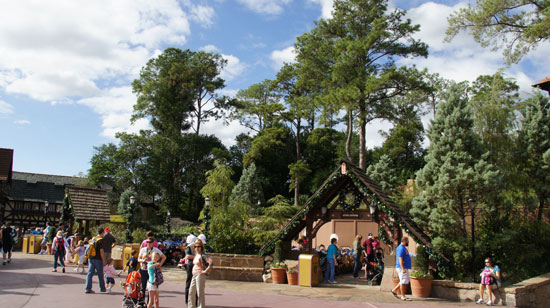 No work has been done on the former Skyway station area since it was removed the first week of June. 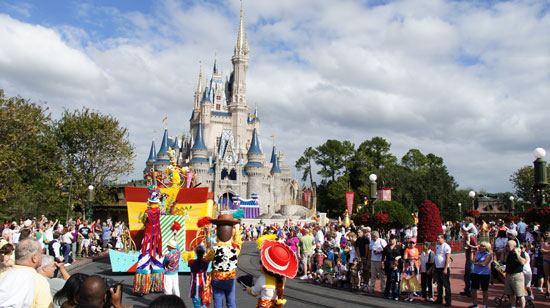 The castle hub is back to normal, after a few days of production on the Disney Parks Christmas Day Parade. 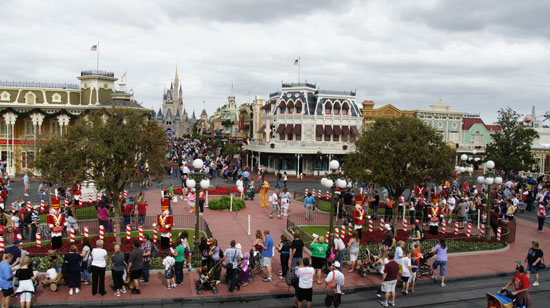 Town Square is back to normal, but Main Street USA is missing something … 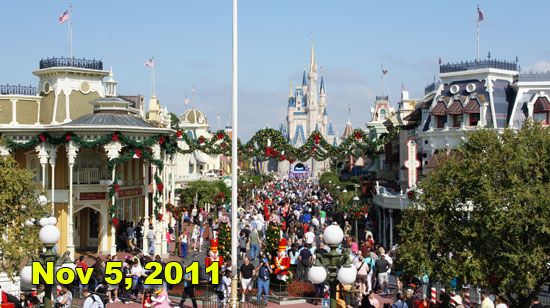 What is missing are the garlands over the street and the flag pole. They were removed for the TV show production. Both are likely to be back up soon.

This is a really fantastic update – thank you!