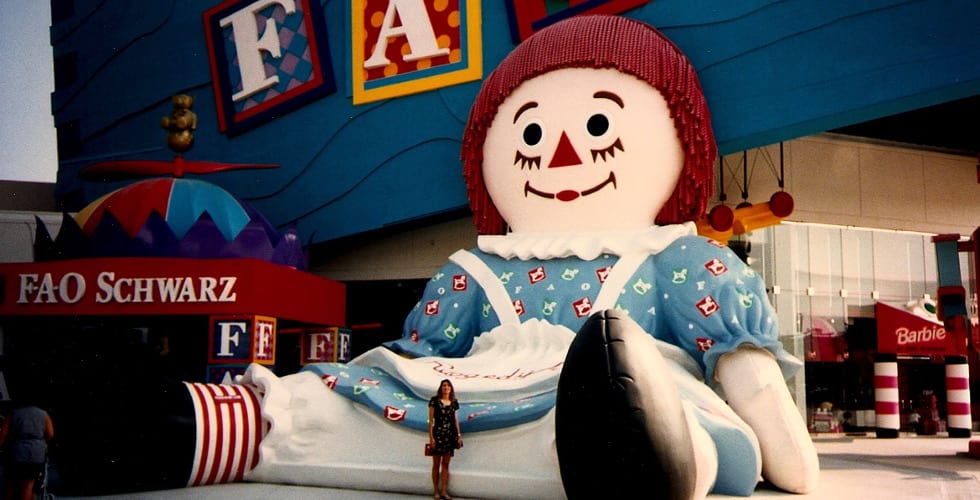 FAO Schwarz, which once owned this iconic toy store at Pointe Orlando, is reopening in New York City.

Giant dolls and anthropomorphic clocks may once again sing “welcome to our world of toys” when the famous FAO Schwarz toy story returns to New York City.

As reported by Commercial Observer, FAO Schwarz will be returning to midtown Manhattan with a new 19,000-plus-square-foot toy store in Rockefeller Center.

The toy retailer, which previously occupied a 61,000-square-foot space at the General Motors Building for thirty years before closing in 2015, has reportedly leased the space at 30 Rockefeller Plaza. The new FAO Schwarz will move into the space occupied by the NBC Experience Store, which was made redundant with the opening of the nearby Shop at NBC Studios.

FAO’s new space is located between West 49th and West 50th Streets, and will span the ground floor and mezzanine level at the Tishman Speyer-owned Art Deco property. A fall 2018 opening is expected, but there is no confirmation of an exact date or length of lease.

FAO Schwarz closed its iconic New York City toy store, which was located at 767 Fifth Avenue between East 58th and East 59th Streets, in summer 2015 due to rising rent. That store’s was most famous as the home of the giant piano, as featured in the “Chopsticks” scene from the Tom Hanks film Big. The company was purchased from Toys R Us by ThreeSixty Group in 2016 and relaunched in 2017. FAO also previously owned a toy store at the Pointe Orlando shopping center on International Drive (seen above) which operated from 1997 to 2004.

This is so nice. I loved that store and took my children there many times.